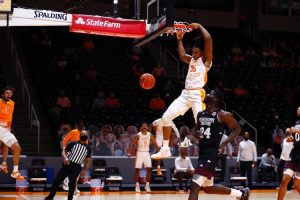 With the 2021 NBA Draft right around the corner on July 29, former Tennessee basketball player Yves Pons has continued to impress scouts all over the country with his explosive play on the court.

Pons can be seen here going through a variety of drills at the Life Sports Pro Day in a video posted to Twitter by DraftExpress.

Footage of Tennessee's Yves Pons at the Life Sports Pro Day. Pons showed him freakish explosiveness and continued to shoot the ball well like he had all week in drills in Chicago. pic.twitter.com/rNsvSpum8m

During the NBA combine event in June, Yves Pons turned heads with his impressive play and even more impressive measurements. Pons ranked within the top five in multiple categories that we’re measured.

The former Tennessee high-flyer ranked No. 3 among all players at the NBA combine in both standing vertical leap and max vertical leap.

Not to be outdone, his former Tennessee teammate Keon Johnson ranked first overall in both of those categories.

In many NBA mock drafts, from ESPN to CBS, Pons is not projected to be drafted in the first two rounds. However, with his proven work ethic and impressive measurements and skillsets, Pons is likely someone that could get gambled on.

The NBA Draft will take place on Thursday, July 29 from the Barclays Center.