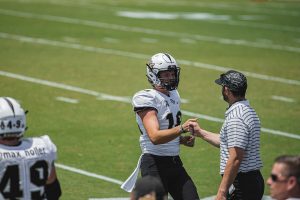 The Hilton Head Island, SC native was the scout team quarterback for coach Josh Heupel and UCF during his freshman year in 2020.

As a senior in high school, Gaston threw for 2,016 yards and 20 touchdowns. Not to mention, he only added in four interceptions.

The 6-foot-2, 182-pound quarterback was listed as a duel threat in his 247 Sports scouting profile. Meaning that he should be able to add to an already loaded quarterback room. Especially considering his experience in coach Heupel’s system.