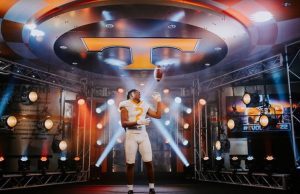 Tennessee football head coach Josh Heupel wasted no time when it came to his recruitment of Tennessee’s newest commit to the 2022 class, Cam Miller. But when did that start exactly?

“The first day he got there,” according to the four-star wide receiver and Tennessee commit, Miller.

On the day that coach Heupel was officially hired, he spent some of his first few hours calling the Memphis wide receiver.

“I think I first started building trust with coach Heupel when he got there and called me the night that he flew into Knoxville,” Miller said in an interview with Rocky Top Insider. “Me and him have been building that relationship ever since.”

Miller, a 6-foot-1, 195-pound wide receiver, committed to the Vols on Monday afternoon. He chose the Vols over nine other SEC schools and 20 other teams in total. A large reason for that is due to the strong relationship he built with coach Heupel.

“I think what made me really want to decide was being around coach Heupel and hearing how he talks about his offensive ways,” Miller said. “So I think being around him and the other coaches and looking at the progress of where they’ve been.”

Miller knew that the new-look Tennessee coaching staff had been successful at other places. Although, after his visit in June, he believed that it would not take long for that success to be translated to Tennessee. 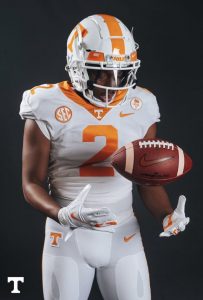 “So with [the coaching staff] being here at Tennessee now and bringing that offense to the SEC, I think that’s something that I looked at and said, ‘Yeah, I want to be a part of that,’” Miller continued on to say in the interview.

But coach Heupel wasn’t the only coach that stood out to Miller. Wide receivers coach Kodi Burns seemed to have also made a large impact.

“Coach Burns is a great guy,” Miller exclaimed in the interview, talking about his new positional coach. “As a former receiver himself, I just think he knows what he’s doing. He knows how to develop receivers that can move on to the next level in the league.”

During his official visit, Miller saw aspects of Tennessee’s offense that he felt like would play to his strengths. And a place that he can take advantage of.

“Just having the speed that I have and with the size that I am, I’m able to catch the ball at a very high rate,” Miller said in the interview with Rocky Top Insider.

Miller does have a good sense of where he can also improve on the football field though. Of course, as any dedicated and hard-working individual would.

“Routes are something I need to get better at as a receiver,” Miller said. “Especially to be able to get open for the quarterback to give me a target.”

Ultimately though, it was what Miller saw from the players that set his decision in stone. The player’s belief in what the coaching staff has done, combined with the strategies and future plans the staff does have, has turned into a winning recipe. Enough for Miller to commit to Tennessee on Monday, at least.

“The players really love the program,” Miller said. “They’re loving it and are excited about what they have coming up this season.”

Cam Miller marked the 11th commit of the 2022 class and the second-highest ranked for coach Heupel and Tennessee.