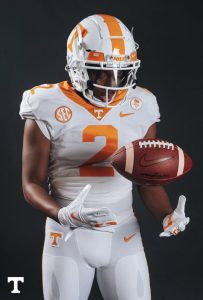 The four-star prospect from Memphis is undoubtedly one of the biggest commits for Tennessee, as Miller has shown the ability to be an impact player whenever he is on the field.

For Miller though, it was the Tennessee coaching staff that pushed him to choose the Vols.

“I think what stood out the most was just the coaching staff and being around them,” Miller said in an interview with Rocky Top Insider. “What stood out was them being honest, truthful, and just being who they were.”

Miller, a 6-foot-1, 195-pound wide receiver from Memphis Academy of Health Sciences, had a massive 21-team offer list. Some of the teams included were Alabama, Florida State, Florida, Ole Miss, and of course, Tennessee.

In fact, the Vols beat out nine other SEC programs to keep the in-state talent in Tennessee.

Alabama, Arkansas, Auburn, Florida, Mississippi State, Missouri, Ole Miss, Vanderbilt, and South Carolina were all among those who offered Miller from the SEC.

Miller has now become Tennessee’s second highest-rated recruit of the 2022 class. He is just one spot under quarterback Tayven Jackson, who committed to Tennessee in April.

The Memphis native, Miller, is the 11th commit in the 2022 class for Tennessee. Miller’s commitment now means the top three recruits for the Vols are all offensive players. Four-star quarterback Jackson and four-star WR Miller lead the way, with three-star receiver Marquarius “Squirrel” White in the third spot.

It wasn’t just the coaching staff that left an impression on Miller when he visited Tennessee on June 25 though. It was also the team itself.

“The players really love the program,” Miller said in the interview. “They’re loving it and are excited about what they have coming up this season.”