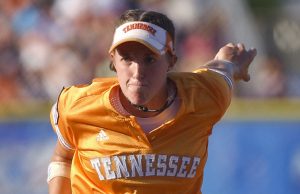 Former Tennessee softball player Monica Abbott and the Team USA softball team will begin their quest for gold on Tuesday as they begin their run in the 2020 Tokyo Olympics.

This will be Abbott’s second Olympic Games. Abbott, along with Team USA, last competed in the Olympics in 2008. In fact, that was the last time the event has seen any softball.

Abbott and Team USA will return to the international diamond as softball has been put back on the Olympic Games program for the first time since 2008.

The softball tournament will last from July 20-27. The six-team field will play in two locations: Fukushima Azuma Stadium and Yokohama Stadium.

Abbott and the Team USA squad currently hold the top-ranked spot in the world. They will be joined by the five other teams represented in the world’s Top 10 rankings.

Abbott is only one of two players on the Team USA roster with experience from the Olympics 13 years ago. In fact, she was the youngest player on the 2008 team.

During the 2008 Olympic Games, Abbott and Team USA won the silver medal.

Abbott, as a Lady Vol, is genuinely nothing short of one of the most accomplished Tennessee athletes ever.

Tennessee reached three consecutive Women’s College World Series (2005-07) behind the arm of Abbott. The Lady Vols would finish second in 2007.

During her time at Tennessee, Abbott stacked the record books over and over. She threw 23 no-hitters during her career. And if that wasn’t impressive enough, she added in six perfect games to go along.

And now, Abbott will set her sights on gold once again as she will lead Team USA at the Olympics in Tokyo.