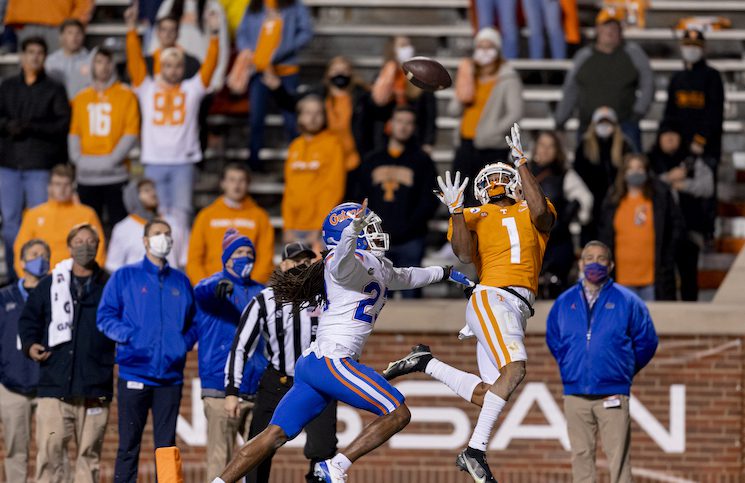 The award, named after the former Notre Dame quarterback, honors the most versatile player in college football each season. The Louisville Sports Commision gives out the honor and 57 players are on its preseason watch list.

Jones is one of the Vols’ most talented receivers after transferring from USC to Tennessee prior to the 2020 season.

The Mobile, Alabama native hauled in 22 passes last season totaling 280 yards. The transfer receivers’ production skyrocketed the second half of the season, recording 222 yards in the final four games.

Tennessee coaches looked to get the ball in the speedy playmakers hands in a variety of ways including jet sweeps, pop passes and screen passes. Jones’ speed should make him a reliable threat in Josh Heupel’s vertical passing attack.

Jones was Tennessee’s kick returner in 2020 where he tallied 398 yards on 18 attempts. The 6-foot receivers’ longest return was 40 yards.

The Vols’ are hoping for a more consistent Jones in his final collegiate season. The transfer receiver had four games last season with less than five receiving yards.

Improved play at the quarterback position and a receiver friendly offense will provide Jones a chance to shine in his final collegiate season.

“I’m so excited with my ability to catch the ball, to get yards after the catch and deep ball threat,” Jones said of playing in Heupel’s offense at SEC media days. “It’s just like it’s a dream come true playing in this offense, especially speaking for my receiver corps and also my tight ends. Like we’re really excited about this offense.”

Tennessee kicks off its 2021 season on Sept. 2 against Bowling Green and will begin fall practice next Wednesday, Aug. 4.