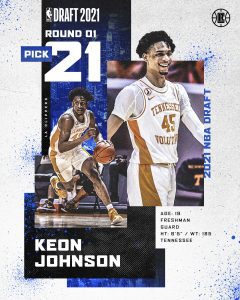 Just seven hours before the 2021 NBA Draft, Keon Johnson was asked who he models his game after in the NBA. His answer? Los Angeles Clippers guard Kawhi Leonard.

“On the defensive end, [Leonard] can defend multiple positions,” Johnsaid said in a Twitter post by the NBA. “And on the offensive end, he can score the ball from anywhere on the floor.”

By the end of the night, Johnson would find himself as a teammate of Leonard’s on the LA Clippers. Along with superstar Paul George, as well.

“I do believe I can come in and make an immediate impact as a younger player,” Johnson said after the 2021 NBA Draft. “I’m open to learning from the vets. Got some great vets in the organization, and I feel that with bringing me that I can potentially help the team get back to where it started.”

Johnson was immediately traded to the Los Angeles Clippers after he was selected with the 21st overall pick by the New York Knicks. The Clippers are a team that has built their foundation on long, athletic guards who can lock down and play defense. And as arguably the most athletic player in the draft, with the defensive mindset taught to him by coach Barnes, Johnson fits that mold to a tee.

“I’m defensive-minded first,” said Johnson after the Draft. “Defense opens up my offensive game. The more stops that I get on defense, the more that I’m fueled on the offensive end.”

“On the offensive end, I can play in the half court but also can handle the ball in the open court and facilitate for my teammates, as well,” Johnson said.

The former Tennessee standout continued on to talk about his offense in his interview. In fact, Johnson said that his offensive game has been his most improved aspect since the Tennessee basketball season ended.

“I do believe that what I bring to the offensive end will be able to help the Clippers,” Keon Johnson said after the Draft. “I also believe that throughout this whole process my game has completely grown and changed from whenever I was last seen at Tennessee.”

While at Tennessee, Los Angeles Clippers guard Keon Johnson was a standout player. He averaged 11.3 PPG, 3.5 RPG, and 2.5 APG in his one year with Tennessee. But, at the same time, Johnson has known that he will have to step up his game to an even higher degree, especially while in The City of Angels.

Even though Johnson certainly has modeled his game after Kawhi Leonard, getting on the actual court with him may be a tougher challenge. Leonard could potentially miss the entire 2021-2022 season due to an ACL tear. And, the five-time NBA All-Star also will become an unrestricted free agent at the end of the 2021-2022 season. Which could throw a wrench in the Clippers future and beyond.

But nonetheless, Johnson is just excited for his opportunity to play with his new team west coast team.

“It’s a dream come true,” said former Tennessee and current Clippers guard Keon Johnson after the Draft. “I feel like all the hard work I put in up to this moment has paid off. Now it’s time for me to take the next big step.”

Taking the next step.