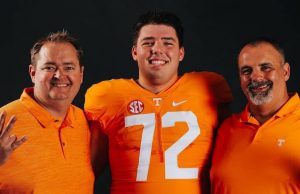 Tennessee has landed its highest-rated recruit in the Josh Heupel Era, as four-star offensive lineman Addison Nichols officially announced his commitment to Tennessee on Monday via AIR College Recruiting. Massive is an understatement regarding both his impact on the 2022 recruiting class and his future impact on Tennessee’s offensive line.

Nichols sat down with Rocky Top Insider to discuss why he chose Tennessee, being recruited by a school undergoing a coaching transition, and what he can bring to the table as a highly-ranked offensive lineman.

“I feel like Coach Heupel and the staff are bringing a culture of success to Tennessee – or at least back to Tennessee.” 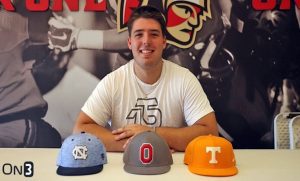 Nichols, a 6-foot-5 318-pound interior offensive lineman from Norcross, GA, chose Tennessee over Ohio State and North Carolina. Although, those were just his finalists. The highly-ranked four-star recruit originally had 30 total scholarship offers. But for Nichols, it was the available opportunity at Tennessee that caught his attention.

“To me, I just felt like the opportunity at Tennessee, on and off the field, was just secure compared to a bunch of the schools,” Nichols said in an interview with Rocky Top Insider. “Along with that, I feel like coach Heupel and the staff are bringing a culture of success to Tennessee – or at least back to Tennessee. I’m excited to be a part of that success and be a leader in the classroom and on the team. I feel like we could be doing some great things in the next few years at Tennessee.”

Nichols mentioned that his relationship with Heupel and the other assistants continued to stand out during their conversations. However, even though the current Tennessee staff was late to the recruitment party, they made sure Nichols felt like a priority to them.

“They called me the first day they were in the office and started recruiting me,” Nichols said about his first contact with Heupel and his staff. “They gave me a call, reached out to me, introduced themselves, and we’ve been hitting it off ever since.”

Establishing that relationship fast was a key factor for the third-highest-ranked interior offensive lineman in the 2022 class.

“We’ve been talking for a very long time,” Nichols said. “I’ve built a great relationship with them, and I feel like we can do great things at Tennessee.”

Even though they might not have known it at the time, coach Heupel and his staff had a moderately uphill battle to climb in the recruitment of Nichols. Tennessee did offer Nichols a scholarship in April of 2019 under Jeremy Pruitt’s staff. However, their talks seemingly stalled out.

“I wasn’t, honestly, too interested in Tennessee with the previous staff,” Addison Nichols said. “I looked at them just to kind of make my grandparents and my parents happy. To be like, ‘All right, I visited Tennessee, blah blah blah.’ But, like I said, with Coach Heupel and his staff, they’ve just done such a great job.” 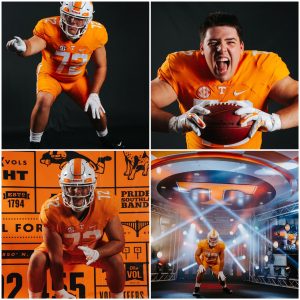 Nichols, the top-ranked offensive lineman from GA, can be a difference-maker from the minute he steps on the field at Tennessee. He has the size, the strength, the aggression, and the mindset to be an anchor on the offensive line.

“I feel like I bring a physicality to finishing,” Nichols said to Rocky Top Insider. He continued on to talk about his mentality on the line. “I finish my blocks, I don’t just pitter-patter at the line. I put them into the ground, I don’t just put them in the ground. On the line of scrimmage, I put them on the ground 10 yards from the line of scrimmage. So I think I feel like I bring a sense of physicality for me that is just better than a lot of offensive linemen out there.”

Nichols spoke of his play with the style and confidence of The Rock in the WWF. He spoke almost as if he was about to throw on the pads right then and there. However, he has the type of infectious aggression that will only benefit his fellow teammates. Which will be a welcome sight for offensive line coach Glen Elarbee.

Nichols is a four-star offensive lineman, according to both 247 Sports and Rivals. The 2022 All-American Bowl invitee from Greater Atlanta Christian School took an official visit to Tennessee on June 18.

With the commitment of Nichols, coach Heupel found his 13th recruit in the 2022 class. The announcement also came one day after Tennessee found its first recruit of the 2023 class.

It won’t just be about football, though, as Nichols prioritized his education during his search. And for him, the Haslam School of Business played a significant role in his commitment to Tennessee.

“I also just feel like the Haslam School of Business is really good for me,” Nichols said in his interview. He also mentioned the connections he has acquired, as well.

“I want to do business, and I feel like it will be good for me. I know Mr. Haslam, I’ve done a lot of tours through the school, and I’m just excited to be a part of it.”

As mentioned before, Tennessee received a massive commitment on Monday to both the football program and the University. Addison Nichols has the passion, the competitiveness, and the motivation to bring “a culture of success to Tennessee – or at least back to Tennessee.”