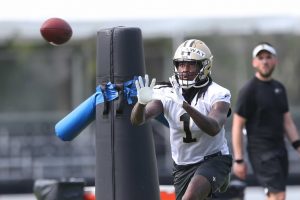 It is out with the old and in with the – also old – for New Orleans Saints WR Marquez Callaway, as the former Tennessee receiver is switching up his NFL number.

Callaway, who previously wore No. 12 with the Saints, has permanently switched over to No. 1. The same number that he wore while at Tennessee.

“12 was special, but I gotta be me,” Callaway said on Twitter about the number change.

While at Tennessee, Callaway took the most significant leap of his college career between years one and two. He went from being a first-year player with one 13-yard reception to a breakout sophomore threat who had 24 receptions for 406 yards and five touchdowns.

In his sophomore year with the Saints, Callaway will be looked upon to take the same type of leap.

According to CBS Sports, the former Tennessee standout projects to be the Saints’ starting No. 2 WR. Not to mention, the Saints will still be adapting to their new era without Drew Brees for the first time since 2005. So there’s no question that the team will give much responsibility to their second-year player Callaway.

It isn’t just the number, however. Saints training camp is officially underway, and Callaway is turning back the clock on his play on the field as well. After he finished sixth in receptions on the team in 2020, Callaway will have more opportunities in 2021. The Saints lost two pass catchers this offseason, Emmanuel Sanders and Jared Cook, who both ranked ahead of Callaway in receptions.

The best play of Saints camp so far has been a throw from Taysom Hill to Callaway, at least in the eyes of New Orleans Advocate reporter Luke Johnson. Hill connected with Callaway on a deep back-shoulder route that even coach Sean Payton was complementary of.

“It was a good throw, a good catch, and good execution by both of those guys,” Payton said.

Callaway has also been working well with quarterback Jameis Winston. On Monday, Winston completed a 40-yard touchdown to Callaway to cap off an 11-for-11 drive.

Marquez Callaway wasn’t the only Saints player who had a connection to Tennessee this week. On Saturday, former Tennessee running back Alvin Kamara also switched over to his player number while at Tennessee. Although for Kamara, his switch was only temporary.

Callaway had 21 receptions for 213 yards in 2020. However, suppose Callaway can take a leap similar to his sophomore year at Tennessee like he has proven he can. In that case, the Saints will undoubtedly reap the rewards of a very talented receiver.

The Saints season opener is on Sept. 12 against the Green Bay Packers.