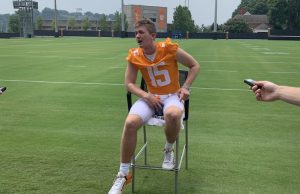 Coach Josh Heupel continued his message from the spring before Tennessee football begins its 2021 fall camp on Wednesday. For every position, regardless of whether a player is a returning veteran or a brand new enrollee, every job will be earned and not given.

“I think that is the challenge for every player,” Heupel said in his press conference. “To earn the trust of the coaching staff.”

While it is valid for each Tennessee position, it is undoubtedly true for the Vols’ quarterback position surrounded by mystery. With four talented quarterbacks in the mix, and one of them having missed out on spring camp, the door is wide open for any of the four individuals. But as coach Heupel said, the winner will have to earn his job over the next 30 days.

“Quarterback is just like every other position,” coach Heupel said. “Those competitive battles they are in, you dwindle the reps down, and make decisions when guys have shown they earned the opportunity.”

Tennessee will return sophomore QB Harrison Bailey and redshirt-sophomore QB Brian Maurer from the 2020 roster. In addition, they also added redshirt-senior QB Hendon Hooker, a transfer from Virginia Tech. Unlike Tennessee’s final quarterback in the rotation, each of those three had the opportunity to run through spring camp with the coaching staff.

The final contestant in Tennessee’s quarterback room is redshirt-junior Joe Milton. The 6-foot-5 244-pound quarterback transferred from Michigan to Tennessee in 2021, but only after the Vols concluded spring workouts. 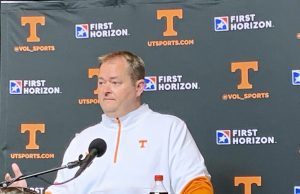 “[The quarterbacks] are going to earn their role as they go through training camp,” Heupel said. “I anticipate us having a base starter, but that doesn’t mean that other guys won’t have the opportunity to play.”

Heupel elaborated on his plan to handle the quarterback room during Tennessee football’s fall camp.

“What that looks like is dictated by the performances during the course of training camp. And, if you look at our track record, we’ve typically had a starter. But other guys have had situational roles.”

With four quarterbacks in the room, all of which who can argue for why they deserve a fair and meaningful shot, Tennessee will need to work quickly to find their guy.

“To me, there is a huge sense of urgency,” offensive coordinator Alex Golesh said in the press conference about finding a quarterback. “You want to start to shape the offense towards who that guy is. And having a plan for who the next one is.”

Golesh continued to say that they need to have a plan A and plan B under his philosophy. Combine that with coach Heupel’s continued mentality for Tennessee, that each position will be earned and not given away, and the Vols look well on their way to being an intelligent and motivated team this fall.

One way or another, one thing is sure. As Heupel and Golesh navigate their quarterback room and decide on a starter, whoever it may be will have earned that job come gameday.