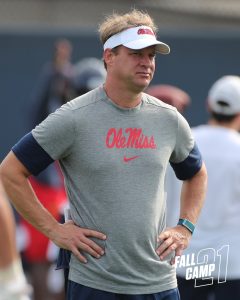 Ole Miss head coach Lane Kiffin is already getting his team ready for their October road test in Knoxville. During Monday’s fall camp in Oxford, “Rocky Top” could be heard playing on the speakers during the Rebels practice.

Kiffin and the Rebels will travel to Neyland Stadium to take on Tennessee this season on Saturday, Oct. 16.

Lane Kiffin was once the head coach at Tennessee.

Today at practice in Oxford, a nod to his former team, as “Rocky Top” was one of the songs that played. pic.twitter.com/iUs7Udb76E

Interestingly enough, it is the second Rocky Top reference by Kiffin in the last month. The first came during one of Kiffin’s answers during SEC Media Days. Kiffin answered a question about the controversy surrounding Tim Tebow’s first-team All-SEC selection back in 2009. All but one SEC coach voted Tebow as the first-team conference selection, and many rumors formed around then-Tennessee head coach Kiffin as the suspect.

“So I brought my ballot to show everyone, to show Urban,” Kiffin said at SEC Media Days in July. “What was the second part of the question? You got me all off there. We’re back to Urban Meyer and Tebow and singing Rocky Top in The Swamp all night long, that part.”

Speaking of both Ole Miss’ trip to Neyland Stadium in 2021 and SEC Media Days, Kiffin talked about that game during that event last month.

Ole Miss head coach Lane Kiffin continued to talk about what he will expect during the Rebels’ trip to Knoxville.

“It’s a passionate fan base,” Kiffin said about the Tennessee fans at SEC Media Days. “I loved our year there, so it will be exciting to go back there. That is a special place, a special university, a special stadium, a special tradition.

Maybe Kiffin was simply tipping his cap to his former team or a song he likes, as alluded to by Brad Logan in the tweet. Or maybe was preparing his team for the chaotic atmosphere expected in Neyland Stadium in October for that game. Maybe even both.

One way or another, one thing is clear. The last two mentions of Rocky Top by Ole Miss coach Lane Kiffin are likely just the beginning with less than three months until the matchup in Knoxville.

The Starting Five: Presbyterian and Colorado