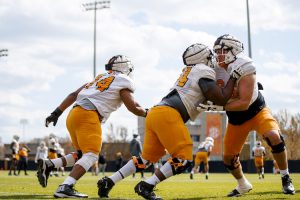 It is not every day that one gets the opportunity to play for their dream school, especially working their way up from walk-on status in the process. Nevertheless, Tennessee’s Dayne Davis is getting to experience it all while fighting for a starting spot on the offensive line.

After turning down a few division-two scholarships and deciding to walk on at Tennessee rather than take a scholarship at Tusculum, his work ethic is starting to pay off in Knoxville.

“It’s just truly a blessing,” Davis said on Monday. “I’ve been really blessed. I was a fan once, obviously, so it would be a dream. Just living the dream.”

When Davis answered if he was motivated to be in this position, his response was simple. Especially after battling every day for a spot on this roster.

You see, for a player like Davis, who has battled every single day for a spot on this roster and even earned his scholarship along the way, it’s never lost on him just how hard he’s fought to be in this position. So, getting an opportunity to start for Tennessee would be the icing on the cake. Although, he will also be cheering for whichever five men take the field against Bowling Green.

“It would mean the world, but it’s going to be the five guys that are playing the best,” Davis said on Monday. “Whoever is starting, I am going to support fully.” 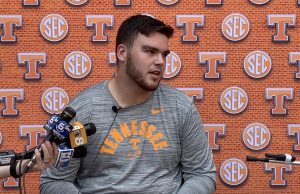 David also spoke about the confidence he plays with while dawning the Power T.

“You know I just had confidence in me,” Davis said. “I knew my work ethic could get me where I wanted to go.”

Over the past eight months, a lot has changed for this team, especially going through a different regime. But for Davis, he no longer looks at practice the same way he did last season.

“See, I look at it like a Monday. You go to work on a Monday, and you don’t really want to go to work. But, there are no Mondays here, so it’s all just get up and ready to go. Let’s go to practice.”

He credits his passion for taking the field every day to this new coaching staff, which has continued to push him into being a potential starter. But compared to last season’s team, they’re having a lot more fun, which isn’t hard to notice.

“It just wasn’t fun being around here,” Davis said. “You know, with the last staff, it was an agonizing kind of feeling, but it’s very much changed now.”

As Davis works under offensive line coach Glen Elarbee, his game has also taken the next step. He has the opportunity to start for a team he could only dream of playing for just years ago. You don’t get a shy answer if you ask him what he likes most about this offense.

“Just everything,” Davis said. “Tempo, being able to wear out defense, get them down, get them worn out, put a lot of points on the board.”

If there’s one thing to take from the story of Dayne Davis, it’s his ability not to be afraid. And the willingness to take a risk on something that you genuinely believe in. Davis thought he could play for a school like Tennessee, and now he’s out there proving it in practice every day.

If that doesn’t motivate you, I don’t know what else will. So as we get closer to the season opener, Davis is working on turning that dream into a reality, one practice at a time.