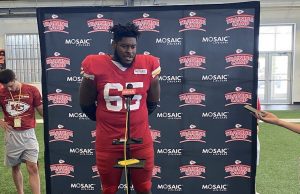 Trey Smith has been nothing but dominant since he entered the NFL during the draft earlier in 2021. But for anyone that saw him play at Tennessee, Smith’s rise to the top in Kansas City isn’t too surprising at all.

After just a few days into training camp at the end of July, Smith had already made his way into the first group of starting offensive linemen. And now, almost two weeks later, Smith has held onto the spot in dominant fashion.

Smith had the opportunity to play quickly with an offensive line that has seen a significant amount of change since the end of last season. But regardless of how Smith got that opportunity and got in the starting lineup, he has done the work to show why he deserves to stay there.

Smith, who was drafted in the sixth round of the NFL Draft, seems to have transitioned to the next level in a fairly quick manner. As you can tell, Smith’s ability to go toe-to-toe with other Kansas City starters, some of whom are former Super Bowl winners, is highly impressive.

Joe Thuney, another Kansas City offensive lineman, praised Trey Smith’s ability to adapt to the game at such a quick rate.

“[Trey Smith is] really strong, he’s physical, he’s smart, he studies his playbook really hard,” said Thuney, according to USA Today Sports. “Everyone is communicating up there on the O-Line, but he’s doing a great job, and yeah, it’s just great to be part of this group.”

Former NFL OL Geoff Schwartz also took notice of Smith’s exceptional practice film. However, in this case, it’s not just about his power and strength. Instead, Schwartz was quick to point out Smith’s football intelligence.

“Trey Smith has been jumping all the 3T,” Schwartz commented on a practice video (below) of Trey Smith. “So the DT goes inside, and Trey redirects inside and hammers the DT. You have to love the way he plays.”

So ultimately, Smith’s placement on the unofficial depth chart at the beginning of game week is only good news for his NFL future. Not to mention, that only adds to the fact that Smith has been working with the ones since the beginning of training camp. The Chiefs coaching staff has certainly noticed Smith and looks to have significant plans for the rookie from Tennessee in the future.

“He’s done a nice job. He showed enough to legitimately be in that position right now,” said Chiefs head coach Andy Reid in July, according to Adam Teicher on Twitter. “He’s got to compete. We’ll see how all of that goes when we get the pads on.”

Reid spoke about Smith in that quote before August even began. Since then, the Chiefs have put their pads on, and Trey Smith has done nothing but continue his dominance.