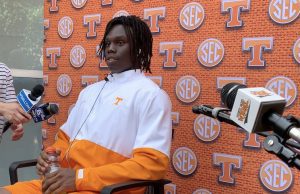 The Tennessee Volunteers football team wrapped up their third fall camp football practice on Tuesday. Afterward, some of the Vols’ defensive backs spoke with the media on campus. Three of Tennessee’s defensive backs sat down for a couple of minutes each and talked about what fall camp has been like, as well as their expectations for the future.

For the most part, the defensive backs talked about the changes to the secondary and how they have been running things with that group. They also spent some time talking about the other players in their group and their position coach, Willie Martinez.

“It was a huge difference… going from high school to starting against South Carolina. And it was a COVID season.”

“I’m a freshman, so I’ve never been to a fall camp like this. Meetings, being mentally focused for a long time, that’s been the biggest challenge for me.”

“Alontae… he’s like my big brother. We have a program called the Big Brothers program. He took me under his wing and has done a great job.”