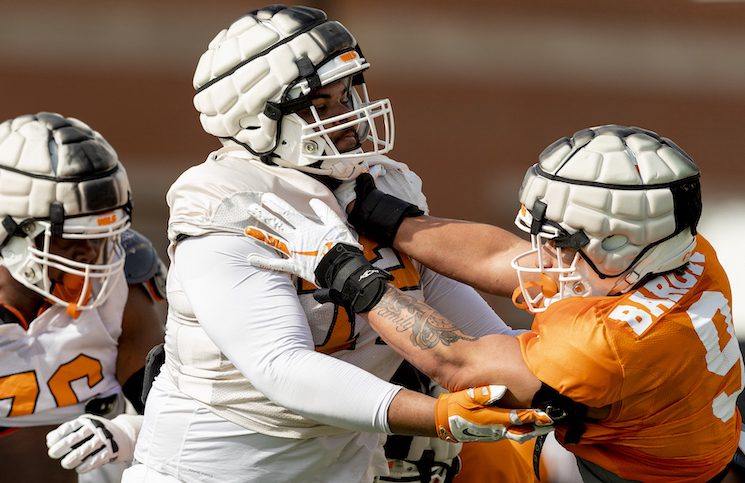 Tennessee offensive line coach Glen Elarbee hyped up his unit’s depth earlier this week. The Vols’ interior offensive line has plenty of bodies, however, Tennessee is short on offensive tackles especially with K’Rojhn Calbert out indefinitely.

Tennessee hopes Darnell Wright will have a breakout junior season at a spot of importance. Wright’s importance on the 2021 Vols becomes even more important now with Calbert’s season in jeopardy.

Wright, who spent his first two seasons at right tackle, has spent time at left tackle this fall to make himself more versatile.

“I think Darnell probably the first couple days was kind of feeling it out a little bit,” Elarbee said on Wright’s move to left tackle. “Boy, I really feel like practice four, practice five he just started to settle in and has done a lot better with techniques and footwork. The mental aspect of knowing the protection piece of it. Obviously, a very very talented guy. I think it was probably challenging a little bit at the beginning because he hadn’t had to do it. Credit to him for pushing through it and is starting to see the light at the end of the tunnel for it.”

Wright, Cade Mays and Dayne Davis are the offensive tackles atop Tennessee’s depth chart right now and if Calbert misses extended time the Vols need those three to stay healthy and play with consistency.

Consistency hasn’t been one of Wright’s strengths through two seasons in Knoxville. Wright has played in 21 games over two seasons and has started a plethora of them. Still, the West Virginia native wasn’t able to get a stranglehold on a starting spot.

Despite the coaching change, this offseason has had more stability for Wright than any other. As a freshman, Wright arrived on campus in June. As a sophomore, COVID-19 shortened spring practice and his offseason, leading to Wright showing up overweight when he returned to campus.

Now, Wright has had a full offseason learning Heupel’s offense and getting consistent weight and conditioning training. The former five-star recruit— and the highest rated signee of the Jeremy Pruitt era— isn’t short on talent and if things click he could completely change the outlook of Tennessee’s front five.

“Darnell is a freak,” offensive guard Jerome Carvin said with a smile. “He can do anything. Once he puts his mind to it he can do anything. He does some unbelievable things that make you say wow and that the ordinary person can’t do that. Seeing him flip from right to left just goes on to show you that he can be flexible and play both tackle spots. He can be good and get comfortable at left tackle. He’s going to help us in the fall for sure.”

Elarbee said he doesn’t want to start whittling down a rotation until after the Vols’ first scrimmage and that’s set for Thursday morning. How and where Wright plays at that scrimmage and where we see him working afterwards could be telling.

Still, Wright’s importance is integral to the 2021 Vols and a full season of development could be what the former five-star needs to jumpstart his college career.