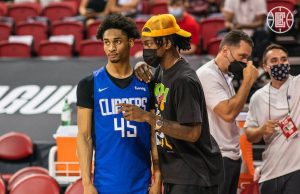 Fresh out of the first round of the NBA Draft in July, former Tennessee players Keon Johnson and Jaden Springer have already started their NBA highlight reel.

In the draft, Johnson was selected by the New York Knicks and then immediately traded to the Clippers. Meanwhile, Jaden Springer was taken in the first round by Philadelphia. There, Springer joined former Vol Tobias Harris on the 76ers.

Johnson and Springer have both been impressive in their early career. In the clips below, Johnson made a smooth move near the top of the key. With pressure in his face from two defenders, Johnson knocked down a three-pointer and drew a foul in the process. Johnson also threw up a slick alley-oop and slammed home a nasty transition dunk later in the game.

Keon Johnson with the steal and dunk pic.twitter.com/625Vs6lmFE

The lob, the jam.

Springer, on the other hand, showed his aggression for the 76ers underneath the basket. Spring executed a textbook up and under for the score. Earlier in the same game, Springer had an incredible move on the sideline, in which he shook and broke his defender.

Johnson and Springer aren’t the only Vols on the 2020 team playing in summer league action though. Former Vol Yves Pons recently signed a contract with the Memphis Grizzlies and had a ferocious block against San Antonio earlier this week.

Keon Johnson and Jaden Springer both made their NBA summer league debuts on Monday. Johnson had eight points, four rebounds, and two assists during his Clippers opening game. Meanwhile, Springer finished his 76ers debut with 11 points, two assists, and even threw in two blocks.