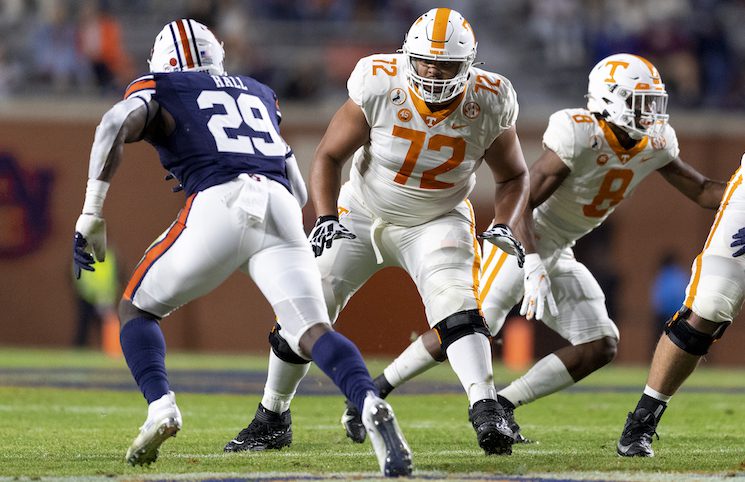 With K’Rojhn Calbert out for the season with a bicep injury, offensive tackle Darnell Wright is one of the most important players to the success of Josh Heupel’s first Tennessee offense.

It’s a fall camp with new experiences for Wright too, as the junior is working at left tackle for the first time in his college career.

Wright clearly isn’t short on talent as his teammates and coaches have raved about his athletic ability. However, the former five-star recruit hasn’t put all the pieces together to have a high level college career.

“You see things but you just have to keep working,” Wright said. “There’s no really set expectation for myself except for doing my best. That’s all I can do.”

What Wright has going for him is his first full offseason. Wright enrolled in the summer before his freshman season and COVID-19 sent the entire team away from campus for three months.

When Tennessee players reported back to campus last June, Wright came back overweight. The then-sophomore weighed 360 pounds before losing 20 pounds and playing the 2020 season at 340 pounds.

Wright has kept dropping weight this offseason, now weighing in at 320 pounds. So why the need to cut weight?

“This uptempo offense, I had to,” Wright said. “There’s no way I was going to be able to keep up. I had to lose weight.”

While he’s down 40 pounds from the point he jokingly “didn’t want to talk about” last summer, Wright is still trying to cut more weight going into the Vols’ season opener in 15 days.

“Right now at camp it’s going to keep going down but I want to lose at a steady pace,” Wright said. “You don’t want to just drop it all. That’s not very healthy. You just want to keep growing gradually.”

Tennessee’s offensive line struggled in the first scrimmage this fall but Heupel was much more pleased with that unit following Tuesday’s rainy scrimmage inside Neyland Stadium.

There’s still growing room for Wright but Heupel is pleased with the progress Wright has made moving from right to left tackle, especially on the mental side.

“He’s only going to continue to get better,” HeupeI said. “I think his purpose and the way he has practiced throughout training camp has been more focused and intentional in the way he takes every single rep. He has become a much better student of the game, understanding defensive alignments, what we are doing offensively. He is a better communicator than he was during the course of spring ball.”