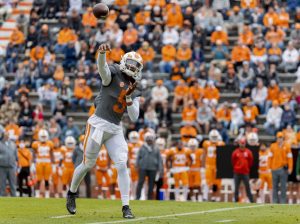 The Johnny Unitas Golden Arm Award preseason watch list reveal was on Thursday with Tennessee quarterback Hendon Hooker in the group. Hooker transferred from Virginia Tech to Tennessee after the 2020 season. However, he came to Knoxville early enough to participate in spring training camp. Which has certainly helped him prepare for Tennessee’s starting quarterback competition.

Hooker played in eight games during the shortened 2020 season for Virginia Tech. He threw for 1,339 yards and dropped in nine touchdowns. But in 2021, Hooker moved to Tennessee to find a fresh start.

The Tennessee quarterback battle got a little smaller on Thursday afternoon, though. Quarterback Brian Maurer did announce his decision to leave Tennessee and enter the transfer portal.

Now, with exactly two weeks remaining until Tennessee’s opener against Bowling Green, the Vols QB battle is down to three.