Catchings played under head coach Pat Summitt at Tennessee from 1997-2001. During the 1998 season, Catchings, Summitt, and the Lady Volunteers won the Women’s Basketball National Championship.

“Basketball is a big reason for who I am today and why I am the way that I am,” Catchings told Legends Magazine in August.

Photo via The Pat Summitt Foundation

After her Tennessee career, Catchings went on to have a WNBA career that was nothing short of historic. The former Lady Vol spent all 15 of her seasons with the Indiana Fever. In total, there are almost too many WNBA awards, recognitions, and honors to list. But the highlights from her career have been WNBA Rookie of the Year (2002), 10 WNBA All-Star selections, WNBA MVP (2011), WNBA Finals MVP (2012), and WNBA Champion (2012). In addition, Catchings is a four-time gold medalist with Team USA in the Olympics (’04, ’08, ’12, ’16).

But during her whole career, Catchings has made an impact off the court equal to her impact on the court. And, that’s partly shown as she currently serves as the Vice President of Basketball Operations and General Manager of the Indiana Fever.

Tamika Catchings, a Tennessee Lady Vols legend and six-time All-WNBA team selection, first found her passion for basketball through her family. Catchings father, Harvey Catchings, played in the NBA for 11 years. He played for the 76ers, the Nets, the Bucks, and the Clippers. 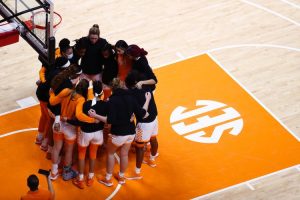 Catchings was one of the main stars of the 2020 Women’s Basketball Hall of Fame Induction. However, the ceremony had to be postponed by a year due to the pandemic. The Pro Football Hall of Fame recently completed their two-class ceremony and had no significant issues.

This Saturday night in Knoxville, TN, Lady Vols legend Tamika Catchings will be inducted into the Women’s Basketball Hall of Fame.