The Vols hit the field on Saturday morning for their 15th practice of fall camp. Tennessee was looking to clean some things up before going into game week mode. In addition, the team was in shells again, as each unit broke off into their work areas after the stretch period.

As a result, the football team will take Sunday off before returning to the field on Monday.

The offensive line continued to work through one-on-one battles, as they looked to set the tone early with their physicality by driving their man up the field. Cade Mays at right tackle, Javontez Spraggins at right guard, Cooper Mays at center, Jerome Carvin at left guard, and Darnell Wright at left tackle were the rotation again on Saturday. 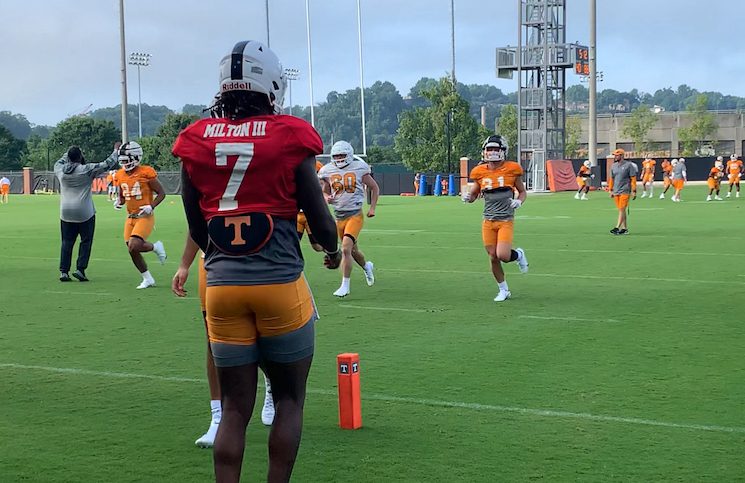 The quarterbacks were working through routes on-air, especially in the red zone. But, again, it was pretty much the same rotation. Joe Milton was taking the first-team reps, while Hendon Hooker and Harrison Bailey were splitting a decent amount of the second-team reps.

The QB’s and WR’s were working on rub routes at the goal line, while the QB’s would also roll out of the pocket. It’s interesting to watch the receivers go into motion, setting up the play, which Tennessee fans are familiar with. From what I could see, most of the throws were on target and in a good position, but it was against ghost defenders.

There were some good throws, with some timing issues on others. JaVonta Payton continues to look like a guy who will help this WR group extensively this fall. Meanwhile, Velus Jones Jr. continues to work back from a minor hamstring issue.

The RB’s and QB’s were working on some speed option pitches, which we’ve seen before out of a Josh Heupel offense.

The defense worked in four groups and rotated stations like they did yesterday. The emphasis remained the same as the groups worked on block shedding and tackling.

In the back half of the viewing portion, the groups worked thoroughly with their position coach. Alontae Taylor and Kenneth George Jr. were the first two guys up in cornerback drills, followed by Warren Burrell and Theo Jackson. Brandon Turnage worked with the corners and ran in the third group.

Jimmy Calloway was absent from practice again on Saturday, but he should be back on the field sometime in the near future. Jimmy Holiday was working with the strength coaches, off to the side, while we were present. Ollie Lane also joined the group of players working on the side.

The Vols will take Sunday off as the team begins to enter an extended game week mode. Josh Heupel is planning to meet with the media on Monday after practice.

Be sure to check out Rocky Top Insider for video footage and highlights of Tennessee’s fall camp on Saturday. You can also find a variety of other Tennessee-related content.