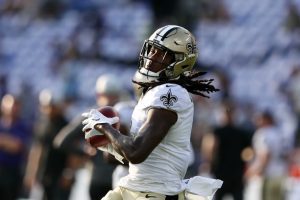 Former Tennessee receiver Marquez Callaway added to his highlight reel on Monday Night with an insane touchdown reception on the Saints’ opening drive.

Lined up on the 43-yard line, Quarterback Jameis Winston faked a handoff and dropped back into the pocket. Callaway, who was lined up as the furthest receiver on the left, ran a straight go-route when the ball was snapped.

Even though Callaway had two defenders on his back, he still had a step on each of them. Winston cocked back and launched the ball into the air. Callaway fully extended in the endzone for the diving touchdown grab with two defensive backs falling on top of him. Pass interference was called on the play, but it did not affect the outcome.

The game is still in progress at the time of this publication. However, the Saints currently lead the Jacksonville Jaguars 7-0 in the first quarter.

In the Saints’ week one preseason game, Callaway finished with three receptions (tied team-high) for 61 yards. That would make Callaway’s touchdown catch on Monday night the first endzone grab of his 2021 season.

Marquez Callaway has two receptions for 53 yards and one touchdown in the first quarter.

UPDATE AFTER PUBLICATION: Callaway found his second touchdown reception of the first quarter. With 2:50 on the clock, Winston connected with Callaway on a 29-yard touchdown pass to the left side of the field.