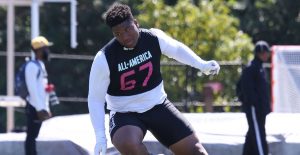 The nation’s top-ranked recruit, Walter Nolen, recently updated his official Top 3 rankings. After giving a Top 3 on Aug. 14, Nolen has switched around one SEC team in particular.

Nolen, a five-star defensive lineman in the class of 2022 from Powell High School in Knoxville, listed Tennessee, Texas A&M, and Georgia in his updated Top 3. On3 Sports first reported the news.

The biggest surprise right off the bat is the removal of Florida from Nolen’s Top 3. On Aug. 14, Nolen gave a Top 3 of Tennessee, Texas A&M, and Florida after the Knoxville Kick-Off Classic.

The Gators’ disappearance from the list is surprising, especially considering how little time passed between both rankings. And, considering Florida did seem to have a solid connection to Nolen. In addition, on July 9, Nolen did release a top five, including Alabama, Florida, Michigan, Georgia, and Tennessee.

“It felt good,” Nolen said on Aug. 14 when asked how it felt to walk out into Neyland Stadium. “I can see myself doing it again, more than one time. Really, more than three. I feel like being here now, I can see probably, maybe, calling this place home in a couple of months.”

Nolen, a 6-foot-5, 325-pound five-star defensive lineman, began his senior season at Powell High School in 2021. As a junior in high school, Nolen attended Olive Branch High in Mississippi. After his move to Knoxville, though, which landed him just about 20 minutes north of Tennessee’s campus, the Volunteer coaches should have a more accessible route to visit Nolen.

“Tennessee is now the front-runner in his recruitment,” said Adam Gorney, Rivals’ National Recruiting Director, near the end of July. “The ball is in coach Josh Heupel’s and position coach Rodney Garner’s court to make it happen.”

Walter Nolen, the top target for Tennessee in the class of 2022, is the top-ranked overall player on both 247 Sports and ESPN. And on Rivals, Nolen has the second-highest ranking. No matter where you look, Nolen is considered one of the most game-changing players in the country.

Nolen had his Powell debut last Friday night during the Panthers win over Anderson County at home. In addition, Nolen recorded eight tackles and a sack. Two of the tackles went for a loss, and he even forced a fumble in the game.

As a five-star recruit, ranked at 0.992 by 247 Sports, Walter Nolen would tie the highest-rated recruit in Tennessee program history. Currently, that spot belongs to Bryce Brown of the class of 2009.