From the University of Tennessee, Smokey really is the top dog in college athletics. With a history that spans over 50 years and ten generations, Smokey has become one of college football’s most beloved mascots.

Currently, Smokey X leads Tennessee through the T during games in Neyland Stadium and has done so since 2013. But with all the history that surrounds the Tennessee athletics programs, their favorite Bluetick Coonhound dog has been with them through it all.

On National Dog Day, Aug. 26, we’ll take a look back at some of Smokey’s most memorable moments with Tennessee. 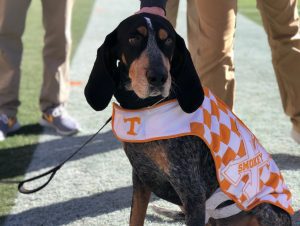 Smokey’s introduction and selection as the Tennessee mascot was anything but ordinary. In 1953, the University of Tennessee held a contest to select the school’s mascot during the football season. However, Tennessee wasn’t just looking for any ordinary animal to represent their school. So, the official contest announcement stated, “This can’t be an ordinary hound. He must be a ‘Houn’ Dog’ in the best sense of the word.”

During halftime of the 1953 Mississippi State game, the contest was officially underway, and the contestants went to the field. Smokey was introduced to the crowd last. But, thanks to Smokey’s excitement and energy on the field, his reception was the loudest. The students, in particular, were yelling and screaming from the stands, which only made Smokey more excited.

The students and fans had made the voice heard, and Smokey was officially Tennessee’s mascot.

To say that Smokey had a rough first few years on the job may be an understatement. In 1955, just two years after being selected to be the mascot, Smokey was kidnapped by Kentucky students. Well, dognapped may be a more appropriate term.

To keep a long story short, a group of Kentucky students, impersonating Tennessee students, swindled Smokey’s owner into believing he was giving the dog to Tennessee for a routine photo shoot. Little did the owner know that the group of Wildcat students was really in the process of stealing Tennessee’s mascot.

Smokey did return home to Knoxville, but it wouldn’t be long before the next situation would appear. In 1957, Smokey II had a run-in with Baylor’s actual bear in the Sugar Bowl.

Jump forward about 50 years to 2006, when Smokey IX was on the Tennessee sidelines before a game. During the Vols’ 2006 matchup against Alabama, one Tide player fell on Smokey during pre-game warm-ups. The story about what happened next, though, may be different depending on who you ask.

“It was over his head, and he couldn’t catch it, but he came down right on top of Smokey,” Hudson explained, according to ESPN in 2006. “Now, what dog worth his salt wouldn’t defend himself?

Shula claimed after the game that Smokey bit his player and that he knew so because he saw the blood from the injury. But again, Hudson disagreed with Alabama’s coach.

“Smokey did not bite him,” Hudson said. “The article in the paper said he bit the player. He got a little of his uniform, didn’t break the skin I was told, but Alabama made a big deal out of it, I understand,” Hudson said.

In addition, Tennessee beat Alabama in that game, 16-13. 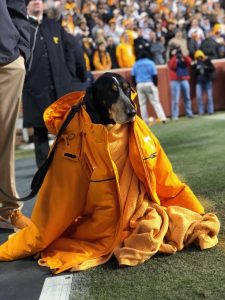 On Saturday, Nov. 15, 2014, the weather that night in Knoxville was in the mid-’30s and dropping. But, of course, that isn’t anything out of the ordinary for a mid-November game in Knoxville. Especially considering how cold it can get in the later months of the year.

On that cold November night, Tennessee took on Kentucky on the gridiron, while Smokey took on the cold on the sideline. And just like any human when it gets cold, Smokey found himself a big, warm blanket.

Tennessee defeated Kentucky that night by a score of 50-16.

i accept this dog as my new leader pic.twitter.com/iYJpvokh1e

On National Dog Day in 2021, we take a look at the famously beloved mascot from Tennessee, Smokey the Bluetick Coonhound.