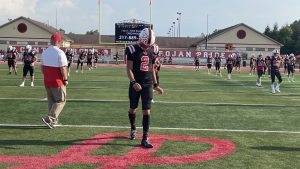 Over the weekend, four-star Tennessee quarterback commit Tayven Jackson set an all-time record at his high school in Indianapolis. Jackson set the Center Grove High School career passing yards record on Friday night after another dominant team win. Not to mention, Jackson still has at least seven games remaining in the season.

Jackson’s Center Grove team defeated Decatur Central on Friday night by a score of 56-7. During the game, Jackson went 6-10 for 103 yards and two touchdowns. The senior quarterback also added in a rushing touching on the ground. However, after Center Grove’s dominance in the first half, Jackson and most of the Center Grove starters did not play much in the second half.

In total, Jackson now has 3,223 career passing yards at Center Grove, which is the all-time school record.

As a freshman, Jackson played in three games but did not record any completions. As a sophomore, he played in all 14 of Center Grove’s games, totaling 1,215 yards. But it was Jackson’s junior season that put him on the map. The Indianapolis native threw for 1,756 yards in 14 games during 2020, setting him up to break the school’s record in 2021.

During his sophomore year, Jackson was showing promise but also inexperience. In 2019, the sophomore quarterback threw for nine touchdowns and ten interceptions. He also added in a 52.6 completion percentage. But Jackson soon found his groove during his junior campaign. Jackson threw for over 500 more yards and eight more touchdowns, five fewer interceptions, and completed 62.1 percent of his passes.

It was also during the 2020 season that Tennessee commit Tayven Jackson really brought out his running ability. Jackson had 46 carries for 191 yards and six touchdowns during his junior campaign. 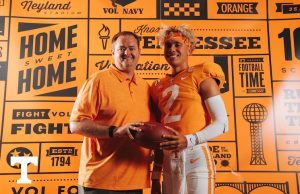 All in all, his play over the last two seasons was good enough to rank him as the 13th best quarterback in the class of 2022, according to 247.

Tayven Jackson committed to Tennessee in April of 2021 and began his senior season at Center Grove on Aug. 22. During Jackson’s week one high school game, the senior quarterback dazzled spectators as he led his team to an opening win.

Jackson and Center Grove will be back on the field next Friday night, Sept. 3, when they take on Carmel High School.