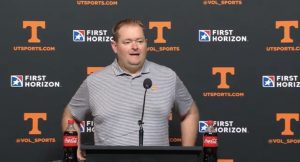 As Josh Heupel mentioned during his Monday press conference, it was a competitive fall camp at multiple positions for this Tennessee football team. However, as we sit just three days away from the season-opener against Bowling Green, the Vols head coach went into detail about several players that earned their opportunity.

Even as the quarterback competition staggered into the final week of fall camp, Heupel was persistent in allowing each guy an opportunity to showcase their talent. In the end, it was Joe Milton who got the nod from the coaching staff and will take the reigns as QB1 for Tennessee on Thursday. However, Heupel did not have to be asked the question on Monday, as he was already ready.

“I mentioned at the beginning of training camp that I thought we would have a starting quarterback by game week,” Heupel said on Monday. “Joe Milton will be our starting quarterback. I talked to those guys earlier about that. Not naming a backup. I believe in what those guys are ready to do, given the opportunity. They’ve continued to grow and compete, all three of them together. Joe’s had an opportunity to take a bunch of reps with the ones here of late and has continued to develop. But I believe in the other two guys as well. They’ve handled the meeting room, handled the practices the right way. Excited about that room as a collective group.”

It felt suitable for Tennessee coach Josh Heupel over the last two weeks. Milton was going to be the guy until he wasn’t. As he discussed the timeframe in which he decided how they would name a starter, Milton’s performance coming out of the second scrimmage gave him the upper leg.

“He’s practiced with the one group here for, I don’t know, probably the last seven to ten days, somewhere in that,” Heupel said. “I think we came out of the second scrimmage and felt like he had taken some positive steps in a shorter amount of time, as far as time on task, some of the other guys being here for the spring. Continued to break up those reps pretty much evenly. Joe got a majority of the first-team offense the last part of training camp and into this game week.”

Heupel added, “At the end of the day, it felt like Joe, his grasp of the offense in a short amount of time, his growth during the middle portion of training camp, his acceleration in what we’re doing, some physical attributes, decision making, led us to put the ball in his hands here, this first ball game.”

On the defensive side of the football, the linebackers were a topic of conversation on Monday. As the Vols line up Juwan Mitchell and Jeremy Banks, it will also come down to their backups and getting enough reps to get a clearer picture. Don’t get me wrong, Mitchell and Banks will be playing a lot, but the Vols will also need guys like Solon Page and Aaron Beasley to become more significant factors as well. 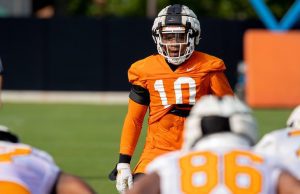 As Heupel mentioned on Monday, both Banks and Mitchell are athletic guys who can attack the quarterback and running game but will also be relied on to help in coverage, which has been a problem over the years. But, they will get help from guys like Theo Jackson at the star position, along with Warren Burrell and Alontae Taylor on the corners.

Expect the defensive line to rotate guys looking to play pivotal roles, as with Matthew Butler and Elijah Simmons. This group will need multiple bodies, especially on the edge, with Byron Young and Tyler Baron, who should be key contributors. Ja’Quain Blakely will get playing time off the edge as well, which this team cannot get enough of, as they’ll need to have a presence in the backfield.

Overall, the Vols have an offense that should score some points and a defense that must contain their stamina. However, as they substitute multiple guys on the defensive front and keep fresh legs on the defensive line, it will be up to the offense to finally break out.

This is something Tennessee fans have been waiting a long time for. Now we’ll see if they can deliver.