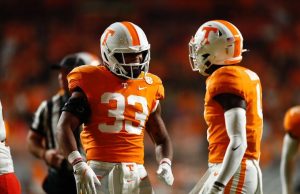 Last Thursday, the Tennessee Volunteers began the Josh Heupel era on the right note, defeating Bowling Green in the season opener. Running backs Tiyon Evans and Jabari Small combined for over 200 yards rushing, while quarterback Joe Milton accounted for three total touchdowns. In addition, defensive back Theo Jackson was all over the field and led the team with 11 tackles.

Tennessee took down Bowling Green by a score of 38-6 Thursday night in Knoxville. And over the weekend, Tennessee dropped their official game highlights.

“It’s week one, year one, and we got a win,” Heupel said after the game Thursday. “Enjoy it tonight. I told the team, you have to (enjoy it). It’s a hard game. But, at the same time, we’ll come back on Saturday after the coaches get back off the road (recruiting), and we’ll have an opportunity to get a whole lot better.”

Coach Heupel was complementary of the team as a whole after the game. However, he did make sure to mention things that he knew could change for the better. In addition, Heupel specifically said that the offense did not live up to their own expectations or capability on Thursday. So, in Heupel’s mind, there are still many more layers to unpack with this offense.

“We can be a whole lot better,” Heupel said.

Before are UT’s official week one game highlights from Bowling Green’s trip to play Tennessee in Knoxville.