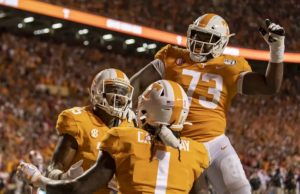 The 2021 NFL season is just around the corner, and like usual, the Tennessee Volunteers will be represented well. Overall, there are 19 former Tennessee players on 14 different teams.

Older and more recent players alike are spread out all over the NFL. In addition, there is at least one former Tennessee player in each NFL conference division.

No division has a former Vol on all four teams. However, the AFC West does have a VFL on three of theirs. The Denver Broncos, Kansas City Chiefs, and Los Angeles Chargers are each on that list. The AFC West as a whole does have three VFL’s in the division; however, so does three others.

The AFC East (Miami, New England), NFC West (San Francisco, Seattle), and the NFC South also have three former Tennessee players in total. The NFC South is interesting, though, as the Saints have all three former Vols while the rest of the division combines for zero. Lastly, the home-state Tennessee Titans also have two former Vols, although both were brought onto the team this offseason.

In 2020, there were 24 players on active NFL rosters when the season began.

The 2021 NFL season will begin this Sunday, Sept. 12. Below are the 19 former Tennessee Volunteers on 14 different active NFL rosters to start the season. Next to their name are their 2020 statistics from their respective locations. Then, below that, take a look at the head-to-head matchups featuring former Vols that are just around the corner this season.

Vols in the NFL 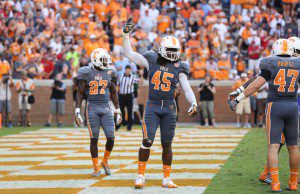 Three games on the NFL’s opening slate will feature former Vols going head-to-head. First, Jennings’ 49ers will host Jalen Reeves-Maybin’s Detriot Lions at 1:00 p.m. ET. Then, at 4:25 p.m., Trey Smith will lock down the Chiefs’ offensive line against former Tennessee defensive lineman Malik Jackson and the Cleveland Browns. And lastly, at the same time as the Browns and Chiefs, Jakob Johnson’s Patriots will meet up with a pair of Vols on the Dolphins. That would be Justin Coleman and Michael Palardy.

Because of the nature of the NFL schedule, there will be several games that feature former Vols on opposite sidelines. For instance, in the four divisions with two teams with a former Vol, they will automatically play twice in the season. So that immediately provides some good games in the future and likely good rematches.

The Browns and Steelers, the Dolphins and Patriots, the Broncos, Chiefs, and Chargers, and the 49ers and the Seahawks will all square off twice during the season.

In addition, there are countless notable matchups that Tennessee fans will be excited about on the NFL schedule. But there are a few that stand out, in particular.

Chargers’ receiver Josh Palmer will go up against two notable former Tennessee defenders in his rookie season. First, Palmer will see Derek Barnett and the Eagles in Philadelphia on Nov. 7. Then, two weeks later, Palmer and the Chargers will face former Tennessee DB Cam Sutton and the Steelers.

Jauan Jennings, who sat out of his rookie season with an injury, is back and healthy for his second year. So Tennessee fans will get a treat early when Jennings’ 49ers play Barnett’s Eagles in week two. And speaking of the Eagles, Philadelphia will host the Chiefs on Oct. 3, which will put Trey Smith and Derek Barnett on the field simultaneously.

Lastly, the state of Tennessee will welcome home several former Vols in 2021, including some for the first time since they played at UT. First, Trey Smith and the Chiefs will play the Titans in Nashville on Oct. 3. Then, on Nov. 14, the trio of Kamara, Callaway, and Tuttle will travel to Nashville for a meeting with the Titans. Finally, Jauan Jennings will make his Midstate return when the 49ers play in Tennessee just two days before Christmas on Dec. 23.