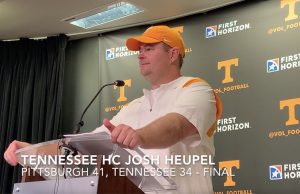 Tennessee HC Josh Heupel after the Vols’ loss to Pittsburgh.

The inaugural Johnny Majors Classic is officially over as the visiting Pittsburgh Panthers took the victory against the Tennessee Volunteers. The Vols began the game on fire thanks to a blocked punt and early touchdown. However, Pittsburgh took a lead and shut Tennessee down each time they were within striking distance.

After the game, Tennessee head coach Josh Heupel spoke to the media about his first loss as a Volunteer. However, one of the main topics of conversation did revolve around Tennessee’s quarterback situation.

“We’re going to go back and watch the tape and evaluate everybody,” Heupel said Saturday on if he was planning on reevaluating the starting quarterback job. “We’ll evaluate the quarterback position as well, but we evaluate everybody in how they played. Some of that may mean more opportunities for other guys, some of it may just be cleaning up some things that they can control and be better at.”

While Heupel was quick to dismiss questions about a starting quarterback change, he was quick to point out where the team struggled. However, at the same time, he also found the spots to speak about things that he did enjoy seeing from the team. In addition, Heupel spoke about some of the injuries on Saturday.

Tennessee will be back in Neyland Stadium next Saturday at noon ET. The Vols will welcome in Tennessee Tech as they look for their second win this year.

Below is the full press conference for Tennessee HC Josh Heupel after the Pitt game. In addition, four of the Tennessee players also spoke after the game, which can be found here.