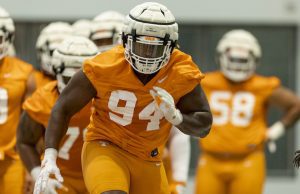 The Tennessee Volunteers (1-1) hit the practice field on Tuesday morning to prepare to host Tennessee Tech on Saturday.

Young will make his season debut this Saturday afternoon for Tennessee. The former Georgia Military Academy transfer did have to sit out of Tennessee’s first two games.

In addition, there is also footage of the Tennessee wide receivers, linemen, and defensive backs going through various drills at practice.

After the Tennessee football practice on Tuesday, some of the team’s coaches and players spoke to the media during game week. Wide receivers coach Kodi Burns and defensive backs coach Willie Martinez had a midweek press conference where they discussed some of the significant storylines with their position group. In addition, Matthew Butler, Trevon Flowers (DB), and Princeton Fant (TE) also spoke after practice on Tuesday, giving their perspectives as game number three approaches.

Tennessee will host Tennessee Tech (0-2) this Saturday in Neyland Stadium. The game will be at noon ET, and the broadcast will be on the SEC Network+.

Video highlights from Tuesday’s Tennessee football practice can be found below.