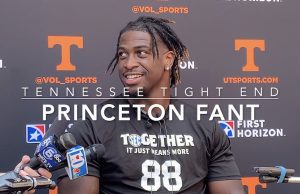 However, for the Tennessee players, their focus isn’t on week four, week seven, or anything besides week three. The Tennessee Volunteers are locked into their game against the Golden Eagles and know they have to take things one game at a time.

On Tuesday, Tennessee had one of their routine, weekly morning practices. After practice, some Tennessee players met with the media to discuss their thoughts on the team and the season two weeks in.

Defensive lineman Matthew Butler, tight end Princeton Fant, and defensive back Trevon Flowers all talked to the media on Tuesday.

As Tennessee looks to bounce back from their first loss of the year, the players are in good spirits as they prepare for Tennessee Tech. Butler spoke about Byron Young’s upcoming debut this Saturday, while Fant talked about how the offense has worked in the tight ends more than he initially expected them to. Lastly, Flowers spoke about the defensive backs as a whole and where he sees improvement coming from that group.

In addition, two Tennessee assistant coaches also had their midweek press conferences on Tuesday. Tennessee wide receivers coach Kodi Burns and defensive backs coach Willie Martinez both gave some insight into what they saw from the game film and what they expect to improve on this week.

Tennessee Tech (0-2) will travel to Neyland Stadium to take on the Tennessee Volunteers (1-1) this Saturday at noon ET.

“First things first, we have to take care of business,” Butler said on Tuesday. “I think everybody watched a little college football last week and saw some things maybe they didn’t expect to see with different teams play opponents that they don’t usually play. You see that year in and year out. Like I said, we have to hate losing enough that we don’t allow that to happen no matter who our opponent is. That’s the biggest thing. Not to mention, no matter who we play, our biggest opponent is ourselves. We just came off of a loss, but even if we came off of a win, we just want to improve, improve, improve, improve, improve to be the best versions of ourselves at the end of the year.”

“I feel like as a [tight end] unit, we played a pretty great game,” Fant said on Tuesday. “Honestly, like I said, just working together and coming together as a unit. The next step there is just continuing to work hard, play ball, and trust the process.”

“It’s just something we work on every day, day in and day out,” Flowers said about Tennessee’s defense still looking for their first turnover. “We haven’t gotten any breaks yet but one of these days we will. It will just be a cycling effect after that. But we work on that every day on the jugs and punching the ball out. Sooner or later, it will come.”