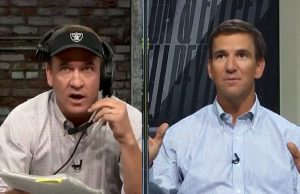 Peyton Manning, an All-American at Tennessee in college, a two-time Super Bowl Champion in the NFL, a host of multiple TV shows, and now, an NFL broadcaster. Is there anything he isn’t up to these days?

Manning was alongside his brother, Eli Manning, for ESPN’s first Monday Night Football MegaCast in week one. From remote studios, both Manning brothers commentated on the entirety of the Raiders and Ravens game. The brothers shared stories, welcomed guests from around the sports world, and gave great insight into the game.

The traditional Monday Night Football broadcast drew 15.3 million viewers, making it the most-watched MNF week one game since 2013. In addition, excluding ESPN+’s streaming numbers, Eli and Peyton Manning drew 800,000 viewers. While the numbers don’t jump off the page, the reaction from fans online certainly did.

Here are some of the best moments from the Manning brother’s debut Monday Night Football broadcast.

Peyton Manning Eyes The Super Bowl Ring He Missed Out On

… but so does Russell Wilson.

Peyton Manning hasn’t taken a dive into the coaching world yet, even though many thought he might after his playing career. It seemed like a no-brainer considering Manning’s legendary knowledge of the game, shown during his famous line of scrimmage calls. But even though he hasn’t played in years, nor has he ever coached professionally, Manning still has the lingo down.

“This is what Jon Gruden is saying to Derek Carr in the headset,” Manning said while putting on a Raiders visor and full headset. “They’re going, ‘No huddle, bronco right tight shorty flash. I’ll letcha know. I’ll letcha know. Call it!'”

“I've always wanted to play Jon Gruden. This is what Jon Gruden is saying to Derek Carr in the headset.”

The Manning brothers showing us what the pre-snap conversation is like on ESPN2 and @ESPNPlus pic.twitter.com/76TK8aRPMw

Then, just a little bit later on, Manning gave his best Jackson impression on the line.

“Here we go, be a lure on the weave here,” Manning said while standing up in quarterback position, with a Ravens helmet halfway down his head. “One mid-trips right bunch eight settle 51 scat H wee rail Y Lion can three jet Church. Blue twenty, blue twenty. Easy, easy. Can! Can! Can! Can!”

“He canned it right there!” Peyton answered. 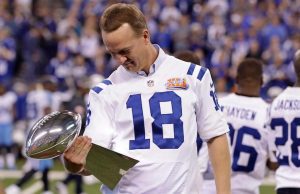 During a critical moment in the back half of the game, the Raiders offense had a crucial miscommunication during a play. The fans were rowdy all night, mainly because it was the debut game in the newly built Allegiant Stadium. But Manning wasn’t concerned with how the fans felt. He was more into the effect that it had on Derek Carr, the home team’s quarterback.

“He was telling [Hunter] Renfrow, ‘No, get back out there. Get back out there!'” Manning said during the broadcast. “And the center thought ‘Get’ was ‘Hut’ so he snaps the ball. It’s just not something that should happen at home. Quiet down, Raiders fans. Drink your beer, quiet down, let [Derek] Carr play quarterback. Come on!”

Eli Manning then spoke about Manning’s tight grip on the Colts stadium (even if he was likely only half kidding around).

“He had that stadium trained,” Eli said about Peyton in Indianapolis. “The fans would get fined if they talked when the Colts were on offense. If a guy was trying to order a beer, everyone would tell him to quiet down until the defense was on the field.”

Peyton Manning Claims To Have Taught Lamar Jackson How to Run

Everyone knows that Peyton Manning was never too much of a threat to run the football, but I’m not sure if Peyton himself knows that. Or at least he won’t admit it. While the brothers were discussing the Ravens’ QB, Lamar Jackson, at the beginning of the game, they spoke about a time when Jackson was a participant at the Manning Passing Academy years ago.

“After this throw, he was asking me about how I like to juke in the open field,” Manning said when the broadcast put up a picture of Jackson throwing at the academy. “I said, ‘Lamar, I can’t tell you that right now.'”

Peyton Manning, along with brother Eli Manning, will broadcast nine more games on Monday Night Football over the course of the season. However, college football fans around the country, including Ole Miss HC Lane Kiffin, have joined to call for the Manning brothers to bring their MNF MegaCast to Knoxville for the Tennessee and Ole Miss matchup.