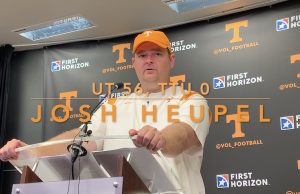 The Tennessee Volunteers cruised to victory on Saturday afternoon in Neyland Stadium. The Vols took down Tennessee Tech in Neyland Stadium by a score of 56-0. The offense played well, but it was the defense that really shined. Not only did the defense hold the opposing offense out of the endzone for four quarters, but they also added in a touchdown and four turnovers.

Tennessee head coach Josh Heupel was complementary of the team in his postgame press conference. He spoke about what he liked from his defensive units, including specific plays from Jaylen McCollough and Solon Page III.

After Tennessee’s win on Saturday, some of the Vols’ key players also spoke to the media after the game.

Watch the full press conference for Tennessee head coach Josh Heupel below. The Volunteers are 2-1 on the season and will open up SEC play against Florida next week.