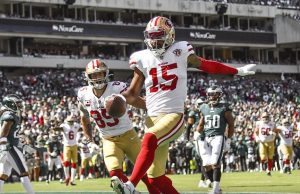 Former Tennessee wide receiver Jauan Jennings is no stranger to big-time moments on the football field. And in the 49ers week two matchup, Jennings stepped up and made a big-time play, announcing his official arrival to the NFL with authority.

San Francisco traveled to Philadelphia on Sunday afternoon to take on VFL Derek Barnett’s Eagles. With 17 seconds remaining in the second quarter, Jennings not only found his first career NFL catch, but it just so happened to be in the endzone, too.

First NFL catch is a TD for Jauan Jennings! 🙌

Jennings lined up in the middle of two other receivers to the left of quarterback Jimmy Garoppolo. The other Niners’ receivers both broke towards the inside of the field, carrying all the defenders with them. That left no one to cover Jennings, who broke out of his route, initially heading towards the sideline to create space. Instead of going to the middle, Garoppolo hit Jennings in stride. Jennings caught the ball, ducked under a defender, and scored the touchdown standing up.

Then, right on cue, came the personality that Jennings is known so well for. After all the obstacles Jennings has had to overcome to get to this game, scoring his first touchdown on his first career catch was worthy of his own endzone dance. And the former Knoxville legend had one lined up in his back pocket.

Jauan Jennings is officially in his second year in the NFL. After being taken in the seventh round of the 2020 NFL Draft by San Francisco, Jennings’ career on the west coast got off to a delayed start. In October of his rookie season, Jennings was placed on the practice squad/injured reserved list. As a result, he never saw the field in 2020; however, Jennings did sign a reserve contract with San Francisco on Jan. 4, 2021.

Ready for a fresh start in 2021, Jennings worked hard to get healthy during the off-season. However, Jennings was a late arrival to the Niners’ fall camp in 2021 after landing on the Covid-19/Reserve list. But Jennings didn’t let the setback stop him. He came back better than ever in the time he did play during fall camp and the preseason.

During the 49ers’ week one game against the Lions, Jennings did see the field, although it wasn’t much. Jennings played 11 percent of the Niners’ offensive snaps (6) and 19 percent of special team snaps (6).

Jennings played at the University of Tennessee from 2015-2019. During his career, Jenning s had 19 total touchdowns and ended his career as a 2020 Senior Bowl selection.