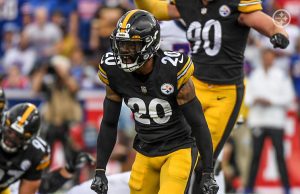 Former Tennessee DB Cameron Sutton on the Pittsburgh Steelers in the NFL. Photo via @Steelers on Twitter.

The NFL season is officially in full swing, and as of Monday night, week one is in the books. Like any other year, several players spread out across the NFL are representing Tennessee in 2021.

In total, there were 27 former Tennessee Volunteers on NFL rosters when the season started. Eighteen of those players were active in week one, and 17 saw action in their team’s first game.

Two Tennessee players from the 2020 Volunteers team saw playtime in week one. First, Chargers wide receiver Josh Palmer hauled in a 17-yard catch after having an impressive fall camp. The other, to no one’s surprise, was Chiefs lineman Trey Smith. The former sixth-round pick was a starter on the Chiefs offensive line and played every offensive snap. In addition, Smith did lay down a fundamental block during a Patrick Mahomes touchdown run.

Several former Tennessee players saw action in a new city to start the season, too. One of which was Falcons running back Cordarelle Patterson, who had a nice game in his Atlanta debut. In addition, Malik Jackson, an NFL veteran since 2012, made his Cleveland debut after playing in Denver for the last two years.

Two former Tennessee defensive players, one much more recent than the other, both made critical fourth-down stops in their respective games. Steelers cornerback Cameron Sutton and Seahawks linebacker Darrell Taylor both had moments on the highlight reel in week one. In the Seahawks game, Taylor had a massive sack on Colts quarterback Carson Wentz on 4th and 1 in the fourth quarter. Meanwhile, Sutton made a 4th and 1 stop when he took down a Bills running back deep in the backfield after a blitz from the corner.

Below are the stats from the former Tennessee players who played in an NFL week one game over the weekend. A star next to a player’s name indicates a starting position in the game. Also under the player’s name is a percentage. That number represents the percentage of the total offensive, defensive, or special teams snaps that the player played in for their team. For example, Marquez Callaway played in 84 percent of the Saints’ total offensive snaps on Sunday.

Football is back so yeah, Alvin Kamara is scoring touchdowns. #Saints

Just can't credit Cameron Sutton enough for his performance against the Bills in Week 1. 4th and 1 stop. this was one of the plays of the game that turned the tide. #Steelers pic.twitter.com/cEZF11fIhm

Keep your eyes on Trey Smith (RG #65) on this play. Keeps going once Pat scrambles and throws a killer block at the end to seal the TD and impose his physicality! pic.twitter.com/isSi4i7qDk