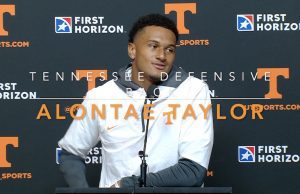 Some of the Tennessee players, including DB Alontae Taylor (pictured), met with the media on Monday.

The Tennessee players are currently gearing up for their toughest test of this season so far. The Vols will travel to Gainesville later this week to take on 11th ranked Florida in their SEC opener at night. It will certainly be a big challenge for the team, but one that they are looking forward to.

After the Tennessee practice on Monday morning, coach Josh Heupel, along with some of the Tennessee players met with the media. During their individual discussions, they all gave some of their closing thoughts on the Vols’ previous win before moving on to the task ahead.

Tennessee opened up the season with a win against Bowling Green before falling to Pittsburgh in the Johnny Majors Classic. However, Tennessee did rebound against Tennessee Tech, winning the ballgame 56-0. While Tennessee Tech was never going to be the Vols’ toughest challenger, it was a great chance for Tennessee to clean up some of their most-nagging mistakes. Tennessee not only found their first turnover of the year but added in three more for good measure.

But now, the Florida Gators remain in waiting for Tennessee, which will provide the Vols their toughest challenge to date. Florida is coming off of a heartbreaking loss to Alabama at home but did look very put together in the loss. The Tennessee players aren’t scared of the challenge ahead, but they are aware of what they are facing. A challenge, indeed.

While the Vols have had flashes of greatness throughout their first few games, there have still been moments of concern. But maybe more than that, there have been moments of wasted potential for this Tennessee team. Times when a play was open but missed due to a Tennessee error or malfunction. Those are going to be the most significant players for Tennessee if they want to compete with Florida for 60 minutes.

“Coming in, I really wanted to be a big-time leader for especially the young guys,” Payton said on Monday. “For me and Velus being some of the older guys in the group, it’s just about trying to coach them up, trying to help them out. With me being in a lot of different game situations, just trying to help them and help them feel comfortable on the field, off the field. Being a big brother to them, a leader just trying to do everything I can to make sure that we all are on the same page and got things rolling.”

“It’s awesome because those guys make a lot of plays in practice,” Taylor said after seeing some of the younger defensive backs succeed. “One thing I’ve kind of said as I’ve been doing this is, everybody is getting the exact same amount of reps, everybody is making big plays in practice, so whenever their time comes, they’re ready to play. That’s exactly what you all see. Saturday, those guys were ready to play when their numbers got called and they didn’t take a step back.”

“Florida, they play well,” Carvin said about Tennessee’s upcoming opponent. “Up front, they definitely play well. They’ve got some big guys up front. Normally what you see from Florida, definitely from an SEC opponent. What we have to do (is) we have to execute. This is a big execution game. We have to execute well, play hard, play fast, and mentally be there. We’re going to be in The Swamp so it’s going to be loud, and we have to make sure we’re mentally locked in.”