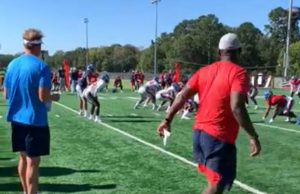 The Ole Miss Rebels and head coach Lane Kiffin are getting ready for their matchup with Tennessee on Saturday night. However, so is the city of Knoxville and the Tennessee fans. On Tuesday afternoon, Tennessee officially announced a sellout in Neyland Stadium – 102,455 fans in the stands.

Kiffin knows that the environment will be challenging during the game, and he also knows that his team will hear one song, in particular, often. During the Rebels’ practice on Tuesday, Kiffin blasted Rocky Top from the speakers with the volume turned up.

As of the last couple of days, the environment has turned into one of the biggest strengths Tennessee will have on Saturday night. For the first time since hosting Georgia in 2017, Tennessee will have a sellout in Neyland Stadium. That game, against Georgia, was also the last time Tennessee had done the #CheckerNeyland concept among the crowd.

However, on Monday afternoon, Tennessee officially announced the return of #CheckerNeyland for Saturday night’s game.

Both Kiffin and Tennessee head coach Josh Heupel had press conferences at the beginning of the week, in which each coach spoke about the environment and crowd. Heupel unsurprisingly set out to motivate the Tennessee fans, while Kiffin spoke about the challenge in front of the Rebels in Knoxville.

“I’m looking forward to an electric atmosphere this weekend,” Heupel said on Monday. “We need everybody in orange and white at the stadium, be there early, be loud and make it a hostile environment for the opponent that’s coming in. A really good football team that we’re facing, in all three phases.”

As a former head coach of the Volunteers and a former opponent, Kiffin is awfully familiar with what Tennessee’s crowd can do.

“We have a lot of work to do, and we’re getting ready for a challenging place to play,” Kiffin said on Monday. “It’s on schedule to be their first sellout in years, so it’s a very loud place, especially at night, and their team’s playing extremely well with two conference blowouts in a row, lighting up on offense. This is going to be extremely challenging.”

During the SEC Teleconference call on Wednesday morning, Heupel gave some praise to the Tennessee fans.

“We have the greatest fanbase in America… expect us to continue to sell out Neyland Stadium,” Heupel said.