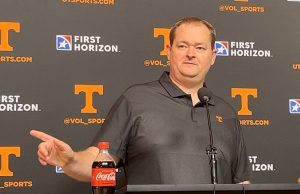 Tennessee HC Josh Heupel, along with a few Tennessee players, met with the media on Monday. Photo by Rocky Top Insider.

Tennessee will have their first bye week of the season in Week 9, but first, Tennessee will have to go toe-to-toe with an SEC rival. The Vols’ will travel to take on Alabama this Saturday night in a game in which Tennessee is already a significant underdog. However, before the Vols transition to their next opponent, Heupel, along with defensive lineman Matthew Butler and offensive lineman Jerome Carvin, spoke about the Vols’ previous game against Ole Miss.

Heupel was up first and began by talking about some of Tennessee’s injury concerns. He did give an update on Hendon Hooker, Tiyon Evans, and Cade Mays, but with no definitive news. Additionally, Heupel praised the environment on Saturday night, calling it the best he has ever seen – both as a player and coach.

“The passion and energy from our fanbase … I’ve been in a lot of competitive arenas as a player and as a coach,” Heupel said. “There was nothing better that I’ve ever been in than what happened on Saturday night.”

Additionally, Butler also echoed the same kind of thoughts while describing his reaction to the environment and LED light show. Butler also spoke about his perspective of Tyler Baron’s touchdown reversal and how the team had to react at that moment.

All three also gave their thoughts on things that happened during the game, both successfully and unsuccessfully. The overall sentiment, especially from the players, was that it was more of a matter of execution as opposed to toughness or effort. And, with it being about execution, both Heupel and the players spoke about ways that the team, and the individual units, can work to improve this week in practice.

Below are the full videos for Tennessee HC Josh Heupel, DL Matthew Butler, and OL Jerome Carvin from Monday to kick-off Week 8.

“It’s a huge opponent,” Heupel said on Monday. “[Alabama is] a really good football team and it’s a rivalry game—one that our guys and staff will be extremely excited about being ready for and going down to Tuscaloosa and competing against a really good football team. It starts with their quarterback. He’s a super-efficient play-maker. He’s got dynamic play-makers around him. Defensively, obviously, front to back, they’re really good. They’re athletic, have the ability to rush the passer. They can do that with pressures and can do that with just their front four. They’ve got good cover guys on the backend. It’s a big test for us and one that we’re excited about.”

“I’ll just be honest, I presumed it was a trick play,” Butler said about Tyler Baron’s touchdown reversal play. “I had movement, I thought it was a trick play, maybe a statue of liberty or something like that, wasn’t sure. So, I was just trying to wrestle him to the ground. I was clawing after the ball, I believe Tyler Baron got it out. I thought the play was (a touchdown), but there’s different rules and different, maybe, interpretations of those rules. You take it and you play with it.”