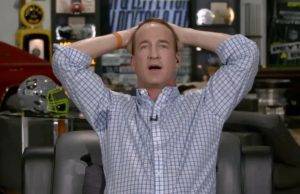 Eli and Peyton Manning will bring back the NFL Monday Night MegaCast tonight. Photo via ESPN NFL (@ESPNNFL) on Twitter.

After a three-week hiatus, Peyton and Eli Manning’s Monday Night NFL MegaCast will be back tonight for Monday Night Football.

The Manning brothers’ production was a hit through the first three weeks of the season, as Peyton and Eli broke down each Monday night matchup from start to finish. Viewers couldn’t get enough of the back-and-forth banter and shenanigans from Peyton and Eli as they brought on guests like Russell Wilson and Rob Gronkowski.

Starting in Week 4, Peyton and Eli Manning did take a small three-week break that was planned before the season began. However, the Manning’s are back for Week 7 as the Seahawks and Saints are set to clash on Monday Night Football.

Additionally, Omaha Productions did release the four guests that will join Peyton and Eli on the MegaCast tonight.

VFL Peyton Manning will also have a few former Tennessee players in the game tonight. Vol fans should enjoy Manning’s commentary on VFL’s such as Saints RB Alvin Kamara, Saints WR Marquez Callaway, and more. In addition, former Tennessee linebacker Darrell Taylor has been a productive member of the Seahawks this season and has been a menace to opposing quarterbacks.

However, Taylor will not be playing against his former UT teammates on the Saints on Monday. In Week 6, Taylor suffered an injury that would take him off the field in a stretcher.

Seahawks DE Darrell Taylor was carted off the field after suffering an injury late in the fourth quarter.

Both teams gathered around to make sure he was OK. pic.twitter.com/xLUFiSB68u

Eli and Peyton Manning will return to their broadcasting rooms for the NFL’s Monday Night MegaCast tonight at 8 p.m. ET on ESPN2.