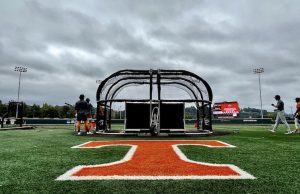 Fresh off of their trip to the College World Series over the summer, the Tennessee Baseball team will be back in the field and in front of the local fans in less than two weeks.

On Tuesday morning, the details behind the 2021 Orange and White baseball game were announced on Twitter. The game will be played at 1:00 p.m. ET on Nov. 6 at Smokies Stadium and all admission will be free.

“We are proud to announce we will be hosting the [Tennessee Baseball] Orange & White Game on Saturday, November 6th at Smokies Stadium!” the official Smokies Twitter account tweeted on Tuesday.

Additionally, Tennessee baseball added in some more detail behind the Smokies’ original announcement.

“This will serve as Game 2 of our Fall World Series, which will now begin on Friday, Nov. 5 (previously was set to start on Nov. 2),” the Tennessee Baseball Twitter account tweeted in response to the Smokies. “We’ll provide more details on game time next week. Look forward to seeing #VolNation at Smokies Stadium!

Tennessee Football will take on Kentucky on that day, although, it is a road game at 7:00 p.m. ET in Lexington.

This will serve as Game 2 of our Fall World Series, which will now begin on Friday, Nov. 5 (previously was set to start on Nov. 2).

“My conversation with [Tennessee AD] Danny White was a slam dunk,” Vitello said according to WATE’s Tim Owens on Twitter. “I was never going anywhere.”

The Tennessee team has been back on the practice field and did play in an exhibition game last weekend. For full Tennessee Baseball practice notes, click here.

Tennessee Baseball HC Tony Vitello thinks the ⁦@Braves⁩ will be in the World Series – and he’s looking for free tickets. 👀 #Vols pic.twitter.com/3QOyMBUGUz