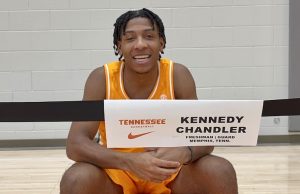 The 2021-2022 Tennessee basketball team had their official Media Day on Tuesday afternoon as each player and each coach was made available to the media.

Overall, there were many new faces to get to know. Kennedy Chandler, Brandon Huntley-Hatfield, and Handje Tamba are just some of the marquee freshmen on the Vols’ roster. Additionally, Justin Powell is a transfer player who came to Tennessee from Auburn. On Tuesday, Powell spoke about the injury he sustained during his freshman year at Auburn.

“It was hard, for sure,” Powell said to RTI during the Tennessee Media Day. “I got the concussion at Texas A&M. And mentally, it was frustrating, I can say that. Because every time I thought I was ready to come back, I wasn’t able to come back. I would have another setback and stuff like that. So it was very frustrating, and mentally, it was difficult. I wanted to be out there and play but I wasn’t able to and that’s just how it is sometimes. But everything happens for a reason.”

Some of the new players spoke about their adjustment to the city, too.

“It’s been pretty smooth,” said freshman Jonas Aidoo, originally from North Carolina. “It’s a great city with a great environment here. I really didn’t expect all of this in Knoxville, but I love it here.”

Even with all the additions, though, Tennessee still does have several returning faces and fan-favorites. John Fulkerson, Josiah-Jordan James, and Santiago Vescovi are just some of the players that are returning for another season under Barnes.

Additionally, Tennessee head coach Rick Barnes also spoke to the media on Thursday for just under half an hour. During his press conference, Barnes spoke on a range of topics, from the distribution of minutes to Josh Heupel and the Tennessee Football team.