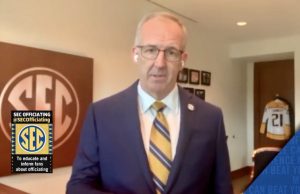 During an appearance on the Paul Finebaum Show on Wednesday, SEC commissioner Greg Sankey spoke about several topics involving the SEC and college athletics in general. One of the topics mentioned early on between Finebaum and Sankey revolved around the incident that took place during the fourth quarter of Tennessee’s game against Ole Miss

“The situation in Knoxville was unique,” Sankey said. “I recognize that there are fans who were upset because when Tennessee played basketball at Ole Miss in 2019, after the game, there were items thrown on the court.”

Following the Volunteers’ win over Ole Miss on the basketball court in February of 2019, Ole Miss fans showed their frustration by throwing trash onto the court after the contest. In videos of the incident, trash was seen sliding across the court and ending up near the Tennessee players. Jump forward a couple of years to when Tennessee and Ole Miss matched up again, except this time, on the gridiron. A delay, lasting just under 20 minutes, took place in the fourth quarter as Tennessee fans in certain portions of the stadium threw their garbage onto the field. The sideline was eventually deemed unsafe for the Ole Miss team after a golf ball was thrown at Ole Miss HC Lane Kiffin.

“We have not had, and I’m a few days away from my 19th year as a member of the SEC staff, games interrupted by fan behavior like that,” Sankey said on Wednesday. “That just has not happened. I greatly appreciate the leadership of Chancellor Plowman, of athletic director Danny White in addressing the issue, following up, and looking to learn how they can improve. But we also have a responsibility across the conference. A fine in that circumstance, I deemed appropriate. It was specified, after that incident in Oxford, that we would have the immediate imposition of fines. And, because we have alcohol introduced, I have the authority to remove the alcohol sales opportunity, which is defined in this league as a privilege for our members. We didn’t do that, but we reminded everyone that that possibility is there when we have misbehavior interrupt a game in the way it did that particular night.” 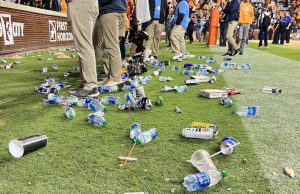 The SEC has addressed a punishment for Tennessee after Saturday’s events in the fourth quarter.

After the incident occurred in Neyland Stadium, Tennessee was hit with penalties by the SEC. The four requirements that were forced upon Tennessee by the commissioner’s office were: