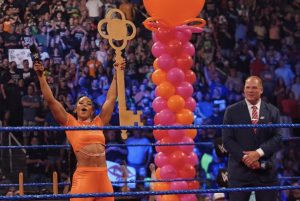 The end of the year is approaching, which means that countless end-of-the-year lists are hitting all different forms of social media. However, there is one particular list that features a prominent name that is tied to the city of Knoxville. Not only that, the name is tied to the University of Tennessee as well.

After Twitter recently released data from the year on their social platform site, Front Office Sports went through and created several year-end sports lists on Thursday. The categories featured examples such as 2021’s most tweeted about NFL team, NBA team, or sporting event over the course of the year.

In the fifth spot of the “2021’s Most Tweeted About Female Athletes” list is the name of Bianca Belair, a current WWE Superstar and former University of Tennessee track athlete.

Belair, whose real name is Bianca Blair Crawford, was born and raised in Knoxville, attending Austin-East High School in her youth. From there, after a few twists and turns along the way, Belair completed her collegiate career back home at Tennessee as a track athlete. During her time with the Vols, Belair was a fiery competitor, earning her an All-SEC and All-American selection. Additionally, Belair was named to the SEC’s Academic Honor Roll in 2011 and 2012.

Following Belair’s departure from the collegiate world, she eventually found her next path under the bright lights of World Wrestling Entertainment. Belair became a nationwide superstar in just a few short years.

When the WWE began touring live in cities across the United States following the pandemic, Knoxville was one of the first stops on the tour route. On Sept. 17, 2021, Friday Night Smackdown came to Knoxville and promoted Belair in the main event in front of her hometown. During the televised hometown celebration, Belair was given a hero’s welcome in the ring, surrounded by orange and pink balloons, along with photos of her during her time as a Tennessee track athlete. In addition, Knox County Mayor Glenn Jacobs, otherwise known as WWE’s Kane, presented Belair with a key to the county in front of many of her friends and family.

Belair’s name is on the “Most Tweeted About” list because of her giving nature to her community and because of her talent shown on TV on a weekly basis. Belair’s character, which draws a lot from who she is as a person, is labeled “the EST” of the WWE: the quickest, the strongest, the smartest, the best. Belair’s openness about her struggles with mental health has also garnered her a lot of support from folks around the world who are sympathetic to or struggle with the same sorts of issues. And through it all, Belair continues to be a person that is inspiring and motivating to any person of any age.

“They say that everything that happens in your past shapes your future,” Belair said on WWE TV during the segment. “Well, Knoxville… It made me into the EST.”

Before the list came out, it wasn’t shocking to think that Belair was one of the most talked-about figures from Knoxville. Now, however, it’s clear to see that the former Vol’s actions have impacted many across the globe.

Belair is a one-time WWE Women’s Champion and was the winner of the 2021 WWE Royal Rumble match.