ETSU head coach Randy Sanders announced his retirement on Monday morning. Sanders has been the head coach at East Tennessee State since 2018.

The connection between Tennessee and Sanders is a long one. After playing his high school ball in Morristown, TN, Sanders then became a quarterback for the University of Tennessee in 1984 until he completed his career in 1988. Just one year after his career at Tennessee ended, in 1989, Sanders became the quarterback’s coach at Tennessee. Over the course of the next 15 years, Sanders held several assistant coaching positions on the Tennessee staff.

Sanders was Tennessee’s quarterback’s coach in 1989 and 1990, and then took over the wide receiver’s coaching position in 1991 and 1992. From 1993 to 1998, Sanders was the running back’s coach and recruiting coordinator under head coach Phillip Fulmer. Then, once David Cutcliffe left before the Vols’ national championship victory, Sanders was elevated to the offensive coordinator position, a spot that he held until he left Tennessee in 2005. 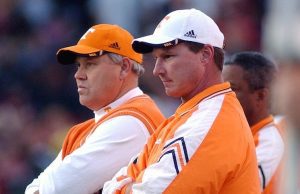 After his time in Knoxville came to a close halfway through the 2005 season, Sanders spent the next seven years at Kentucky. Four of those years were spent as the offensive coordinator for the Wildcats.

Former Tennessee coach Randy Sanders is the only coach to have a part in the first and last BCS National Championships. Sanders won with Tennessee in 1998, then won with Florida State as the Seminoles quarterback’s coach in 2013.

Sanders just finished leading ETSU to a historic season in 2021. The Buccaneers finished the season at 11-2 and made it all the way to the third round of the FCS playoffs. The Bucs came up short against FCS powerhouse North Dakota State. However, even with the loss, the 2021 season was representative of the most successful season in ETSU history.