ESPN television host and University of Tennessee alumni Paul Finebaum didn’t waste any words when speaking about the Music City Bowl on Monday afternoon. While Finebaum has gone with and against particular Tennessee trends in the past, the ESPN host was fully on the side of the Volunteers in the Music City Bowl aftermath.

During his show on the SEC Network on Monday, Finebaum went off during a segment, claiming that Tennessee was the rightful Music City Bowl winner.

“I refuse to accept that Tennessee lost the game,” Finebaum shouted on his show. “In my opinion, Tennessee won the game. And I’ve never said this before, because I do not like to criticize the officials, but I am going to. The officials stole that game from Tennessee. It’s a total farce. An absolute total farce!”

Finebaum then went on to share some advice to the Tennessee head coach on how he would handle the situation.

“And my recommendation to Josh Heupel is this,” Finebaum went on to say. “I don’t care what the NCAA rulebook says – that should be counted as a win and Tennessee should officially be 8-5… That’s how this show will recognize it.” 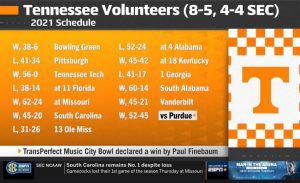 After Finebaum’s segment and the subsequent commercial break, the ESPN host returned to the television with a graphic of Tennessee’s 2021 schedule. Next to each opponent is the corresponding win/loss marker, however, the Music City Bowl does have a “W” next to it.

“As you go through the schedule, the only game I’m flipping officially is the Purdue game,” Finebaum said in relation to the graphic on-screen. “That is officially a win in my book.”

In overtime of the Music City Bowl, Tennessee was on the receiving end of a controversial “no touchdown” call from the referees during a crucial 4th and 1 play from the goal line. The officials did not rule in the favor of Tennessee, allowing Purdue to set up and kick the game-winning field goal on the very next possession.

Your 8-and-5 Tennessee Volunteers, ladies and gentlemen…courtesy of @finebaum pic.twitter.com/JWK0ju8sqm