The biggest events of National Signing Day are in the books. For Tennessee, the Vols’ #eVOLution22 2022 class ended with Top 20 rankings across all three major recruiting outlets.

However, for Josh Heupel heading into year two, so did many of Tennessee’s opponents.

Following the bye week in week five, all but two of Tennessee’s games will be against teams with Top 30 recruiting classes. While that isn’t anything new or shocking for any SEC schedule, it is fascinating to look at when spread out in a comparison format. 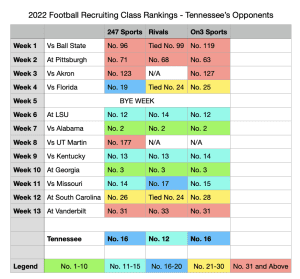 Alabama comes in as the highest-ranked Tennessee opponent in terms of recruiting, as the Tide fell one spot behind Texas A&M on all three sites. The second-highest opponent on the Vols’ schedule is none other than the defending champion Georgia Bulldogs.

Incoming freshman talent, especially in terms of a collegiate football program, does not always equal immediate success. Each and every 2022 class will have standout players that make an impact right away, but most will feature the future building blocks of the team.

But what these rankings are indicative of, however, is how Tennessee stacks up against SEC competition. Currently, when looking at the Vols and their eight opponents, Tennessee is right in the middle spot with four teams above and four teams below. The exact same is true when adding in the rest of the SEC teams. According to 247 Sports and On3 Sports’ rankings, Tennessee has the 7th ranked class in the SEC, right on the better side of the halfway point.

Tennessee’s season-opener against Ball State is slated for Saturday, Sep. 3, 2022.