After five-star quarterback Nico Iamaleava opened the door to the uniform conversation on Monday, Tennessee head coach Josh Heupel went through it later in the week.

Uniforms are always going to be a big topic of conversation with how much buzz they generate on social media. Recruits love to look flashy on national television, and fans want to buy the newest, coolest uniforms that their team can offer.

Heupel is well aware of how much of an impact something like uniforms can have, especially in recruiting. While speaking with GoVols247 in an interview, Heupel pulled back the curtain on his Tennessee uniform thoughts and ideas.

“I think recruits absolutely love the alternate uniforms,” Heupel said in the interview via 247’s Ryan Callahan. “Not that they don’t love the orange and white, because everybody does. I think we’ve got a classic uniform that’s as good as there is in college football. Our players love the classic uniform, too. They like the occasional twist.”

Tennessee debuted a brand new all-black look called “Dark Mode” during the 2021 season which featured a black jersey, black pants, black cleats, and a redesigned traditional white helmet to incorporate more black tones. While the plan was to debut a matching black helmet to go along with the jersey and pants, supply chain issues spanning across the football landscape made it impossible for Tennessee to do so. Instead, the Vols’ equipment staff went into overdrive to change the classic white helmet enough to match. 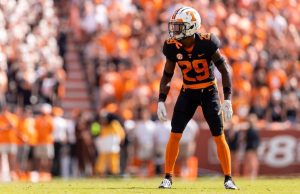 “Last year, the only thing we were able to get done was the ‘Dark Mode,’ just because of supply chains and that type of thing,” Heupel said in the interview. “We’ll see what happens when we get to kickoff next year.”

An interesting tease from Josh Heupel to say the least. Picking apart his words, to probably an exaggerated extent, it could sound like Tennessee had multiple alternate uniform plans last year, but the dark mode uniforms are the only ones that eventually got pushed through. Could there be more plans on the drawing board still from last season? It does seem like Tennessee will be completing the dark mode look with an all-black helmet next year, but the door is also open to maybe even another uniform combination. We’ll have to wait and see.

There are some people out there that don’t believe in the importance of uniforms and disapprove of when Tennessee goes away from “tradition”. While everyone is entitled to their own opinion, flashy uniforms are better for recruiting at a place like Tennessee that can’t just offer national championship appearances every other year. At the end of the day, these recruits didn’t see Tennessee win the National Championship in 1998 donning the traditional orange and white. So for those 18-year-olds, there’s less of a tie to tradition and more of an importance on flash.

As mentioned earlier this week, flash equals cash in the world of college athletics.

Wrapping up his weekend in Knoxville last Monday, five-star quarterback prospect Nico Iamaleava gave his thoughts on Tennessee’s threads and even may have revealed that a new plan is in the works.