On Wednesday morning, On3 Sports’ director of recruiting Chad Simmons officially locked in his prediction for Smith to choose Tennessee for his commitment. In addition, On3 Sports’ Recruiting Prediction Machine does have Tennessee leading the charge for Smith’s services at 93.9 percent. Alabama, the second-ranked team, is quite a bit behind Tennessee at 3.1 percent.

As one of the most talented safety prospects in the class, Smith has been garnering significant attention from around the country. The four-star prospect has 30 scholarship offers according to 247Sports, including powerhouses such as Alabama, Georgia, LSU, Michigan, Oklahoma, Penn State, and Tennessee.

Sylvester Smith is a defensive back from Munford High School in Munford, Alabama. Standing at 5-foot-11 and weighing in at 195-pounds, though, Smith has been a jack-of-all-trades type of player in high school. During a breakout sophomore season, Smith saw action as a kick returner, running back, and defensive back.

According to Rivals’ recruiting rankings, Smith is currently rated as the third-highest safety in the class. Additionally, Smith is ranked as a top 30 safety by 247, Rivals, On3, and ESPN. All of the recruiting publications except for one have Smith listed as a four-star, while On3 has him as a three-star prospect.

If Smith does wind up committing to Tennessee, he would make for the sixth player in the class, the second defensive player, and the first commitment since five-star quarterback Nico Iamaleava. Currently, the Vols’ class ranks 10th nationally and 3rd in the SEC according to 247.

There’s still a little bit of time until Smith announces his decision, though, but not too much. Four-star safety Sylvester Smith is reportedly slated to make his commitment on April 25. 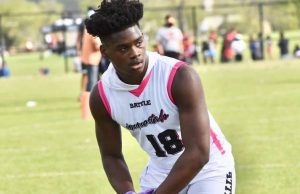