Former USC wide receiver Bru McCoy has officially committed to the Tennessee Volunteers. The former five-star recruit has been in Los Angeles at USC for the last three years but decided to enter the transfer portal in January. And after a visit to Knoxville in late March, McCoy made his commitment to Tennessee Football on Tuesday night. 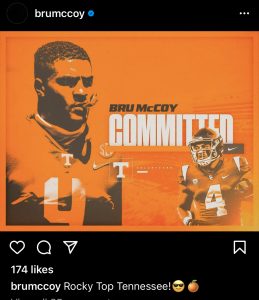 Standing at 6-foot-3, 220-pounds, McCoy is a unit on the football field as an outside receiver. As a recruit in the class of 2019, McCoy was the top-ranked athlete in the class and the ninth-ranked prospect in the entire class. Unfortunately, though, his career hasn’t necessarily mirrored his talent through this point.

McCoy had a redshirt freshman season in 2019 after an illness before returning to the field during the COVID shortened season in 2020. During that season, McCoy had 236 yards and two touchdowns on 26 receptions. McCoy did not see any action on the field in 2021 either after a legal situation unfolded in the fall.

Even though things didn’t work out over the span of a few years in Los Angeles, McCoy is hoping that a significant change in scenery will help showcase his talent.

“Big, strong and physical as a wideout with good hands and high-level body control,” 247 Sports’ National Recruiting Expert Greg Biggins said in his evaluation from 2019. “Runs well enough to get behind a defense, makes the tough catch look routine and can do something with the ball in his hands after the catch as well. Is also a tremendous blocker and plays with incredible effort.”

If McCoy can progress and earn himself a starting job on the receiving unit heading into next season, Tennessee could be looking at Cedric Tillman (6′ 3″, 215) and Bru McCoy (6′ 3″, 220) on the outside with likely Jalin Hyatt (6’0, 180) as a change of pace player in the slot. Josh Heupel showed last year that he wasn’t afraid to start and focus on a brand-new transfer player as former Mississippi State transfer JaVonta Payton was tremendous in his lone year in Knoxville.

While in Knoxville in March, McCoy spoke to VolQuest in an interview about his thoughts on the coaching staff, Knoxville, and Tennessee football.

“I’d say mostly I enjoyed the people, the coaches, and the culture,” McCoy said in the interview. “They’ve cultivated an unbelievable culture here. It’s healthy, it’s working towards greatness, and you can tell that there is something special being built here. It’s really meaningful the way the coaches care about the players, care about the program, and they care about winning – which is most important.”

“I enjoyed also just the environment around here,” McCoy said. “It’s different than where I grew up, but it feels like home when I come around here.”