NCAA officials have officially made a comment on the situation that occurred during the Knoxville Super Regional on Friday night. During the fifth inning of the game, Tennessee outfielder Drew Gilbert was ejected from the game after arguing a call at the plate during his at-bat. Moments later, Tennessee pitching coach Frank Anderson was also ejected from the game after exchanging words with the officiating crew.

After the game was over, the NCAA officially released a statement to the team and the media:

“Tennessee #1 Drew Gilbert argued several pitches during the top of the second inning, steaming in from centerfield,” crew chief Billy Van Rapphorst told pool reporter Mike Wilson. “To begin the next inning I talked to the player between innings, warning him to direct his comments only to his team, not our crew or the other team. He said O.K. and that he just gets excited.

“During the fifth inning following strike one, Tennessee batter Gilbert yelled an expletive, followed by another expletive as he walked out of the box and was subsequently ejected.”

With the ejections, neither Drew Gilbert nor Frank Anderson will return to the Tennessee team for Saturday’s game against Notre Dame. If the Vols win, Tennessee will force a decisive game three on Sunday. If Notre Dame wins, however, it will result in the end of Tennessee’s historic season.

Tennessee and Notre Dame will return to Lindsey Nelson Stadium for game two of the Knoxville Super Regional on Saturday at 2:00 p.m. ET. Tennessee ace Chase Dollander will have the starting nod on the mound for the Volunteers. 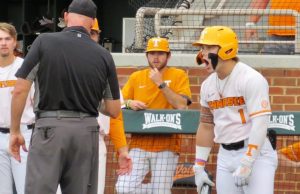