With the Tennessee Volunteers’ baseball season ending in the NCAA Super Regionals round, a few of Tennessee’s players are gearing up for the MLB Draft this summer. The Vols’ SEC Championship-winning team could have three potential first-round draft picks in Blade Tidwell, Drew Gilbert, and Jordan Beck.

One of the more notable trends that the mock drafts show is Jordan Beck’s slight decline following the postseason. In fact, Jim Callis of MLB even directly called out the fact that Gilbert had jumped Beck in his own outfielder rankings. Speaking of Beck, it does seem as though the Colorado Rockies have an interest in the powerful Tennessee outfielder. The Rockies, though, do have three draft picks in the first 38 selections (No. 10, No. 31, No. 38) and may wind up selecting Beck with one of the later picks. 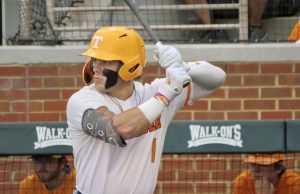 Here are what some of the top MLB Draft experts are saying about Blade Tidwell, Drew Gilbert, and Jordan Beck before the 2022 MLB Draft begins on Sunday, July 17.